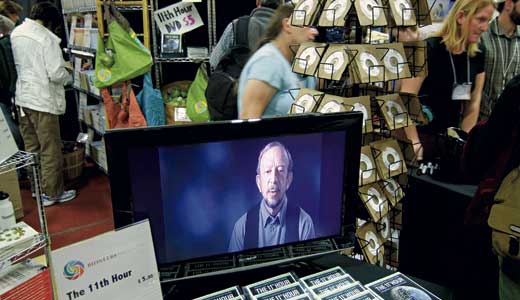 That the host of a show on CNBC and former senior managing director of Bear Stearns would take such a position is unremarkable. What does stick out, though, is Kudlow’s lumping together of environmentalism with forces he surmises as un-American.

You don’t have to be an anarchist to believe that responsible stewardship of the planet is not only patriotic, but good business. However, as scattershot as Kudlow’s statement might sound to some, it is in line with a trend that’s been occurring over the past few election cycles: a slow but successful marginalization of the green movement that’s evidenced in recent data. (A 2011 Yale poll and separate Smithsonian/Pew study both reveal that Americans are increasingly less worried about climate change — if they believe it exists at all. This is in spite of, well, all the crazy weather shit that’s been going on this year.)

The bluegrass edition of the Bioneers Conference will seek to address these declines this weekend with a number of workshops, lectures, musical performances and film screenings all related to the pursuit of sustainability.

Now in its third year, the three-day expo at University of Louisville will also feature dispatches from the national conference in San Rafael, Calif. These will arrive in the form of televised keynotes from the likes of “Animal Planet” ocean correspondent Philippe Cousteau Jr., environmental scientist Amory Lovins and Gloria Steinem, the Ms. Magazine publisher and feminist icon.

Ben Evans, the co-founder of Bluegrass Bioneers, spoke with us during a break in the planning. Evans actually agrees with Lawrence Kudlow about the connection between “green” and the occupiers (not to mention the feminist and civil rights movements). But Evans rejects talk of marginalization, despite recognizing that “green washing” does exist.

“In some ways, getting greener has become so engrained in the culture, we’ve stopped seeing it,” Evans says. “I was on a flight, which is not very green, but I was flipping through Sky Mall and was amazed at how many environmental things are in there — all these seals of environmental approval, which I don’t remember seeing 10 years ago.”

But what do you say to the guy who’d rather squeeze his SUV through a fast food drive-thru than join a reskilling seminar on vegetable growing? What’s the easiest tweak that would most benefit the unlikely Bioneer and the environment around him? To answer this, Evans borrows from Wes Jackson, founder of The Land Institute.

“Sustainability is not going to happen until it happens with our food. Food is an easy answer in terms of what somebody can do. Anybody reading this is probably going to eat sometime in the next four hours, and that’s an opportunity to have an impact.”

Reducing one’s food footprint doesn’t necessarily mean converting to veganism. In Evans’ view, being conscious of where your dinner comes from is an easy first step, because generally, local is fresher and tastes better. The secondary benefits — cleaner air, a stronger local economy — are just gravy.

To that end, the Bioneers will offer several food-related events throughout the weekend, like a vegetarian potluck dinner on Friday by EarthSave, an organization that believes healthier people equal a healthier planet. On Saturday night, local chefs will participate in a sustainable edition of “Iron Chef,” with ingredients donated by Whole Foods and 15Thousand Farmers.

A “reskilling fair” will run on Saturday and Sunday, which is designed to reacquaint participants with the daily procedures that were commonplace 100 years ago. These useful skills include preserving and canning, chicken coop building, beekeeping, foraging and clothes making.

But the Bluegrass Bioneers Conference isn’t all about food. Topics ranging from the state of the world’s polar bear population to the hazards of coal ash will be tackled. Members of the local business community — from Brown Forman, GE and Whole Foods — will form a panel discussion called “Corporate Sustainability with Substance,” a discussion that might interest Lawrence Kudlow.

The conference kicks off on Friday morning with a Peace and Justice Mini Fair. All events are free of charge. For more information visit www.bluegrass-bioneers.org.