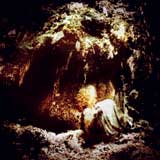 Black metal bands in the United States usually get a bad rap for taking too much from the Scandinavian sound without adding to it. Wolves in the Throne Room is a rare band that transcends the genre and pushes the boundaries of what black metal can sound like. Celestial Lineage still features raw, fast black metal but also throws in folk influences, doom, layers of rich atmosphere and analog keyboards to create what can only be called a new black metal aesthetic. Every one of their releases has featured long, intricate songs; their ability to write compositions instead of traditional songs grows stronger on every release. Their sense of dynamics creates an intense listening experience. The album contains three songs longer than 10 minutes, followed by two pairs of shorter tracks and atmosphere-heavy interludes. The tug of war between beauty and harshness creates an intriguing contrast that helps carry the album across whole worlds of interesting need-to-hear new music. This is definitely a black metal album worth investing time in.