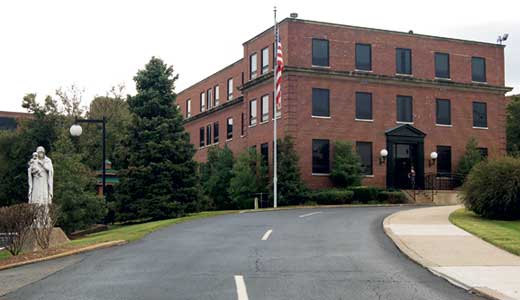 Amy Doyle had worked at Our Lady of Peace psychiatric hospital for nearly nine years, most recently as a mental health associate working with mentally retarded teenagers at a group home where she helped them with school and activities of daily living.

But in late September, Our Lady of Peace management suddenly suspended Doyle.

A week later, Doyle was fired. According to her, the reason was obvious: She had been attempting to organize her co-workers into a union, seeking to improve what she saw as unsafe conditions at Our Lady of Peace for both the staff and the patients.

With Doyle’s firing, several other workers who have been supporting unionization now fear a similar fate. They hope to continue speaking out about conditions at the hospital and the need for a union, but they fear retaliation from the management of Our Lady of Peace and its’ owners, Jewish Hospital & St. Mary’s HealthCare.

Doyle started organizing a year and a half ago by helping a friend encourage co-workers to sign union cards with the American Federation of State County and Municipal Employees (AFSCME) Council 62, covering Kentucky and Indiana. Before she knew it, she became one of their organizing leaders.

What drove her to do so is what she describes as “dangerous conditions” at Our Lady of Peace, much of it due to understaffing.

“With the kids, we had some that were very violent, and then some that were not, making a dangerous situation for those kids,” Doyle says. “There have been times, because we’re understaffed and we had to deal with one particular patient, that another patient slips into another patient’s room. There could be a sexual incident, or someone could be beaten up, because there’s not enough staff there. And that kind of thing happened multiple times.”

Doyle notes that staff often gets injured too, and that she once tore her ACL at work when trying to corral a child on her own. She claims management never addressed these problems in a serious manner.

After being temporarily suspended in the spring — for a timesheet snafu Doyle says management later admitted was a mistake, and just a few weeks after complaining about conditions for patients — Doyle and her pro-union co-workers picked up the pace in their organizing. They held meetings outside of work and went door-to-door to employees’ houses, asking them to sign a union card.

That’s when management at Our Lady of Peace began to pick up their efforts to discourage union activity.

“They sent out two different anti-union letters telling people unions were bad for them, and that us going to their door was considered harassment,” Doyle says. “But while they’re saying that we’re harassing them, they’re actually harassing us.”

At the end of September, Doyle was suspended and ultimately fired for breaking the aforementioned “distribution” policy.

“During my termination, I asked them if it was because I am a union supporter, because I was handing out union stuff, and they couldn’t answer,” Doyle says. “They didn’t say yes, they didn’t say no, which I consider an admission of guilt in itself.”

“A union is not necessary or desirable at Our Lady of Peace,” Nolan wrote. “Unions bring the risk of disruption, division and strikes. This is inconsistent with our mission of providing quality care. We do not think team members should be expected to pay hard-earned money in dues to a union. Common union promises of higher pay often do not come true, especially in this economy.”

Jewish Hospital spokeswoman Barbara Mackovic tells LEO Weekly she cannot comment on personnel matters, but says, “Safety is the No. 1 priority at Our Lady of Peace, as it is with all of our facilities.”

Neither Nolan nor management at Our Lady of Peace responded to inquiries for this story. However, on Oct. 17, Nolan sent another letter to employees, this time warning them that LEO Weekly had inquired about an “incident” at Our Lady of Peace, and that they should expect a story soon.

In the letter, Nolan emphasized that they have had “many efforts and successes” related to workplace safety, and she made a few more digs at unions.

“We do not believe that there is a need for employees to turn over their right to speak for themselves to a union,” Nolan wrote. “We work hard to provide employees with a just and fair environment, as well as satisfactory work conditions and internal processes to address workplace concerns.

“It is not right for you to be forced to pay expensive dues with no guarantees.”

LEO Weekly spoke with several current and former Our Lady of Peace employees who confirm Doyle’s account of the safety conditions and anti-union persuasion of management. They declined to be named in this story, fearing they would face termination or legal action.

“For years, pretty much since Jewish Hospital took over, it’s just been a joke,” one longtime Our Lady of Peace employee tells LEO. “They absolutely do not care about their patients or their staff.

“They’re just downright dangerous, whether it be staffing patterns, or the way that they intermix the patients on the units, age-wise or IQ-wise. We have kids with criminal charges that are mixed on units with kids that are mentally retarded. The staff are constantly telling them how dangerous this stuff is, and they absolutely ignore it.”

A former nurse at Our Lady of Peace — who claims she also faced retaliation for union organizing — agrees it is dangerous for both staff and patients.

“It’s not a safe environment at all,” she says. “One night, this bigger kid is beating the crap out of this smaller kid, and management is standing there saying, ‘Don’t touch those kids, that’s child abuse.’

“It’s just horrible. I mean, you get spit on, bit, punched, and they do nothing.”

Another mental health associate says the anti-union message is clear.

“We’ve had a couple of staff report that management has come right out and said that they’ll be fired if they pursue (union organizing),” he says. “But these people are also too afraid to come forward about it. That’s one thing that Jewish Hospital and Our Lady of Peace were definitely successful at, was scaring the pants off of them.

“It’s a genuine fear, which we can all understand, but at the same time, at some point, especially for these kids’ sake, we’ve got to stand up and say something.”

An appeal hearing was scheduled for Doyle at Our Lady of Peace on Oct. 19, but she is not optimistic about the outcome. Still unaware of the specific reason for her firing, she must defend herself without a lawyer. Meanwhile, the local AFSMCE council has filed a case against Jewish Hospital with the National Labor Relations Board.

“We’re positive that what they did was a violation of the National Labor Relations Act, and we’re going to fight it until she gets reinstated, and that is our hope,” says David Warrick, executive director of AFSCME Council 62. “We’re going to stand with her, whatever it takes. What they did to her was wrong, it violated her rights, and we’re not going to allow an employer to do that.”