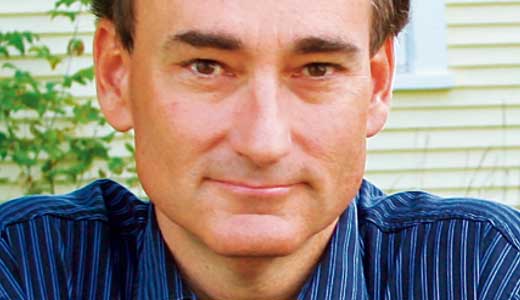 Author Chris Bohjalian has achieved all the signs of a modern American literary success: an Oprah book (“Midwives”), multiple film adaptations of his work, his publisher’s blessing to write about any topic he chooses. As he’ll discuss at a reading/signing presented by the Jeffersonville Public Library on Friday, he’s rather determined not to write the same book twice. But he surprised himself when his personal muse led him to “The Night Strangers,” a dark and compelling read that’s perfect for this time of year. As Bohjalian tells LEO, “I love ghost stories. But I’m not sure I ever expected to write one at this stage of my career.”

There’s much more to this book than sudden incursions of the supernatural and things going bump (and “Boo!”) in the night. There’s a New England town with “herbalists” who are using ancient knowledge to attain their mysterious goals. And in the center of the story is an airline pilot and his family, who have retreated to the town in hopes of a quiet life in a quaint old house. The author describes the writing experience: “It was going to be about one pilot’s descent into madness and despair after (a) nightmarish water-ditching. I must’ve been a third of the way into the book before the metaphorical ghosts became real ones.”

Once the ghosts demanded to be part of the story, Bohjalian worked them in via his usual thorough research and eclectic interests as well as his personal bookshelf. (“I love Shirley Jackson’s ‘The Haunting of Hill House’ … there’s no question in my mind that the house in ‘The Night Strangers’ was inspired, on some level, by ‘Hill House’ — and by my own house in Vermont.”)

LEO: Your research for this novel went so far as to place yourself in a cockpit simulator that was turned upside-down. How do you get to do that?
Chris Bohjalian: While I interviewed a lot of pilots, there aren’t a lot of people who can tell me what it’s like to be in a plane that is upside-down and filling with water. I wanted to know what it’s like. There’s one in Groton, Conn. … and they had only one stipulation: “I want to put you in the dunk tank when I’m using it anyway.” So I did it on a day with three National Guard aviators.

LEO: What sort of research did you conduct to understand herbalism?
CB: I’ve always been interested in smart, unusual, eccentric women on the margins — midwives, homeopaths, a woman strong enough to fall in love with a transsexual. So I think it was inevitable that that proclivity of mine, in a book like “The Night Strangers,” would find its dark side. In the ’90s, I did a lot of magazine work — for Cosmopolitan, Readers Digest and MORE. And my favorites to write were those articles such as “Herbal Cures for Headaches” or “Jump-Start Your Relationship with These Herbal Aphrodisiacs.” I had a great time, always, doing these stories. Not simply because it was great fun meeting all of these alternative practitioners — but also because it was fun to try out all these bizarre-world herbs and spices. I will tell you that my wife and I had a great time when I was writing the “herbal aphrodisiacs” article.