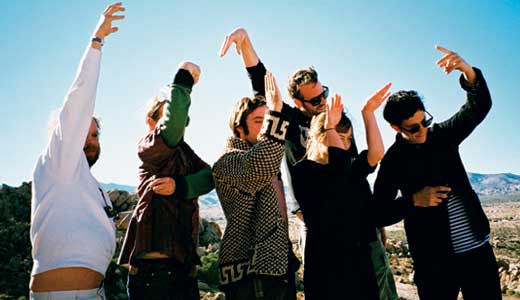 Louisville’s own Will Oldham, the only constant in the musical presentation known as Bonnie “Prince” Billy, has been performing since before LEO was just an idea in John Yarmuth’s brain. His new album, Wolfroy Comes to Town, was released on Oct. 4. This special performance introduces a new series of cultural events at the Clifton Center.

LEO: What do you like about the Clifton Center and what they plan to do there?
Will Oldham: I played a show there in the ’90s, and I think I was in a play there in the ’80s, possibly. I like that it’s in the best neighborhood in Louisville. I like that it’s a solid room that sounds good. It’s usually nice to play in a room that was designed as a theater, so there’s an inherent acoustic quality to the room — as opposed to so many of the rooms we play, where music was just added as part of the business of the place. Or, people have relied upon the eventuality of a PA making something transmittable to the ears of the audience. It’s always a treat to be in a room where there’s a relationship between what’s going on audibly from the stage and how people are meant to receive it, with or without electricity. And the Clifton Center is one of those places.

LEO: Is that why you like to play so many unconventional venues, because the sound quality can vary so much from club to club?
WO: When we travel on the road, we never travel with a sound engineer. Many clubs have great sound engineers who know what they’re doing very well, who deal with such a wide variety of music every night that they know their room better than anybody we could bring. We don’t do effects, we create our own dynamic on the stage, so we don’t need somebody who knows our set, we need somebody who knows and likes music, and knows their room and is consistent. At the same time, the variety of acoustic scenarios that we come across in the course of a tour, at times, can be jarring. So it’s good to fall back on an exterior scenario, or theatrical scenario; sometimes there’s something nice about people sitting in assigned seats, like in the Clifton Center, and sometimes it’s nice when people have the freedom to position themselves how and where they like during the course of a show.

LEO: Who’s playing in your band on this tour?
WO: (Guitarist) Emmett Kelly, who is also the Cairo Gang, he’s based in Chicago. Angel Olsen, based in Chicago, who’s singing with us and also makes records under her own name. And Ben Boye, who’s based out of Chicago as well, is playing a variety of keyed instruments — harmoniums, Hammond Rhodes, pianos. From Louisville here, (drummer) Van Campbell, (bassist) Danny Kiely and myself.

LEO: Have you worked up any surprising cover songs for this tour?
WO: Now, if I told you that …

LEO: (laughs) I knew you were going to say that.
WO: Well, you asked the question, “Do you have any surprises?”

LEO: You could’ve said “yes” or “no.”
WO: Right. I have no idea what a surprise would be or wouldn’t be for anybody. So, what’s up with Mayor Fischer not talking about Bonnie “Prince” Billy?

LEO: (laughs) That’s a great question.
WO: Yeah, it is a great question! Now he’s moved on to the Sherman Minton Bridge thing and talking to Barack Obama — there are more important tasks at hand.

LEO: I don’t know. I think it’s a city law that you have to endorse My Morning Jacket.
WO: (laughs) Yeah, I think that’s true. Does that mean I’m breaking a law?

LEO: Would you ever run for office here?
WO: I don’t think my past and personal life would stand up to the scrutiny of a campaign. Not in this life.

LEO: Is there anything else you’d like to cover for this article?
WO: I figure that making something readable in hopes that advertising can still get sold at a premium is up to you. So, when you feel that you’ve got the material to jump off the page … I’m happy.