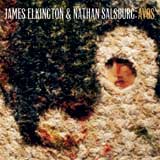 Louisville resident Nathan Salsburg is an archivist for the Alan Lomax Archive and a music columnist for LEO Weekly. (Disclaimer: I’ve been friends with Nathan since middle school, and we occasionally collaborate on promoting musical events in town). What is perhaps less known by the public at large is Salsburg’s prowess at the finger-picking guitar style established in the 1960s and ’70s by John Fahey and others, as he’s previously only released one song, on the Tompkins Square label’s Imaginational Anthems compilation series. His new collaboration, Avos, with Chicago-based guitarist James Elkington, as well as his upcoming solo debut Affirmed, should definitely garner Salsburg some well-deserved praise as a guitarist. Avos is intricately composed, yet has a fresh, contemporary sound without feeling too gimmicky or of-the-moment. Salsburg and Elkington tastefully show enough dexterity to make the listener wonder, “How’d they do that?” without being too flashy. Rather, Avos is a slightly melancholy affair, with plenty of melodic, serene moments to match the six-string sleight-of-hand.