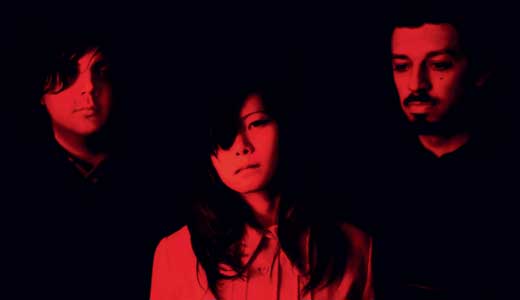 Some might not associate dreamy, danceable music as the soundtrack to maturity, growth and an inevitable resignation with the sometimes arbitrary unfairness of daily life. Those people might expect it even less from a band that began a decade ago as “Sportfuck.” But in 2011, Asobi Seksu singer Yuki Chikudate is more than willing to acknowledge that not everyone can grow up to become Kanye.

LEO’s interview with Chikudate began with a discussion of our cats, laughing at the idea of taking them along on tour. “Oh God, no! No, no!” she exclaimed, horrified at the notion. “I would never do that to them. And I wouldn’t do that to myself … They would not get a lot of time to run around and be animals. It’s just unnatural.”

And it’s natural for a group of people to drive around the country in a van?

“Oh God, no! Oh, no,” Chikudate laughs. “Definitely not normal, but you make it work. It’s the only way to get around unless you’re, like, U2 and you get to fly around everywhere. It’s certainly not natural to be cooped up in a van with a bunch of people, but that’s what happens.”

Chikudate, who also plays keyboards, and guitarist partner James Hanna have grown into their sound through the years. Their earlier songs paid homage to the shoegaze bands that inspired them in the ’90s, but recent releases, like February album Fluorescene, have moved in a dreamier, poppier direction.

“I really appreciate it when people say, ‘This couldn’t be anything else but you guys.’ And that’s how we feel about Fluorescene, especially. I don’t think any other band could have made that album,” Chikudate says. “People have tried to define what this band is, and what our sound is, for so long. The one thing they were comfortable hooking on to was ‘shoegaze,’ and … I guess for listeners and journalists who need to have the music explained, it’s fine, but I think it’s kind of unimaginative. We love that stuff, obviously, no one can deny that, and we’re obviously influenced by that. In terms of, if we ever had a manifesto, that element was going to be a part of it. But we’ve definitely moved on — and evolved, hopefully — and I think we’ve become our own thing. I don’t know what that sound is, technically … James sometimes calls it ‘psychedelic trance pop.’ I don’t know what that means, but it sounds good, I guess.”

Their recent album does reach back, however, with cover art by Vaughan Oliver, whose influential work has adorned the covers of albums by the Cocteau Twins, Dead Can Dance and other similar-minded artists of the previous generation. “He was a long shot for us,” Chikudate says. “We figured, ‘Why not try for the big guns and see if anything comes back?’ I just Googled Vaughn Oliver’s name and I got ‘[email protected] …’ (laughs) So I decided to write to it, and he actually said yes. We were super psyched.”

Sometimes growing up means taking risks and facing rejection. Other times, it might mean becoming more involved with the world outside.

“I used to listen to my iPod all the time and stay glued to it all the time — all the time — and I would freak out if I forgot it. ‘Oh my god, I’m going to have to listen to the world!’” she laughs. “But nowadays, it’s like, ‘Oh, right. I should listen to what’s actually happening. I don’t have to be sealed off from everything all the time.’ I learn a lot just listening, dipping in and out of people’s weird conversations. Sometimes I’m floored by the fact that I can hear cicadas in Brooklyn. It sounds kind of cheesy, but I’ve learned to listen to what’s around me, and not constantly rely on music to stimulate me at all times.”

What stays the same through all this growth, however, is that Chikudate loves “what I do, I enjoy it wholeheartedly, and if people want to listen to it, then that’s fucking awesome. I’m not Kanye. You don’t have to say, ‘I’m a genius!’ all the time. I don’t really care that much anymore … I don’t deserve it any more than anyone else. We’re pretty lucky that we have ears at all, people listening and paying attention at all.”