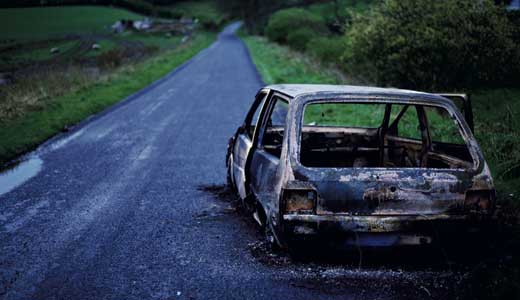 John F. Kennedy said it is important to remember the names of your enemies. This idea, of an individual holding onto the memories of wrongdoing, is seen in “Willie Doherty: Traces,” an exhibition at the Speed Art Museum.

Doherty, an artist whose photographs and videos have been seen around the globe, including the Venice Biennale, uses the fear, suspicion and beauty found in the landscapes of Northern Ireland to create his work. From the violence between Catholics and Protestants, to the lingering distrust created in the aftermath of those clashes, Doherty allows us an opportunity to question our own prejudices and anxieties.

It is common to process past events, especially traumatic ones, months or years after they occur. But then, are we truly dealing with reality? Is it possible to analyze our emotions when they are buried under layers of influence? This idea, of our memories being mutable, both by our emotions and current experiences, is a resonating topic in Doherty’s portraits of Ireland.

And in conjunction with the exhibit, Doherty and Ryan Daly, executive director of the Louisville Film Society, co-curated a film series, “Cinematic Remembrance: Memory and the Movies.” The films provide additional insights into how our identities are bound to our memories, and the dangers, both personal and cultural, of believing our haunting dreams are factual. Exploring the relationship between recollections and reality is an ongoing fascination for artists, filmmakers and writers. Daly expands on Doherty’s imagery, our relationship to memory, and why the film series at Speed is worth a visit.

LEO: Doherty’s work feels influenced by documentaries. Do you see this influence?
Ryan Daly: I see it in Doherty’s text photographs. The words seem to suggest a way to consider, or frame the photograph. This also happens with documentary cinema. As events occur over time, the perception of that footage can change. We are not the same spectators, culturally or aesthetically, who witnessed man first walk on the moon. That footage doesn’t contain the same meaning today as it did for someone in 1969. And I think that relationship exists in (Doherty’s) text photographs, because context is so important to how you read them. Just as context can change a film — like seeing “Total Recall” in an art museum.

LEO: Speaking of “Total Recall,” why would it be seen differently in a museum?
RD: It’s easy to look at a movie like “Total Recall” and just think popcorn film. And it is fun and entertaining, but at the same time, Paul Verhoeven is up to something else, too. “Total Recall” is like pop art, with its monsters, aliens and spaceships. Perhaps viewing it in an art museum will provide different light for its consideration. It’s important to remember that many artists came together to make a film like “Total Recall” — costume designers, FX people, a range of artistic collaborators. The viewing context can change the reception of a film.

LEO: If all the films in the series share a theme, what makes them distinct?
RD: All of these films are made with a style unique to the filmmaker. For instance, Chris Marker’s “Sans Soleil” is an essay-type documentary, but it’s also a travelogue. There is a lot of contradiction within the film itself. It sets up the idea that even memory is false and artificial.

LEO: What interests you personally about memory and its relationship to cinema?
RD: I think it’s really interesting how cinema is able to impose the past onto the present. In a dark room with a big screen, it can even create an artificial memory, which is why it has such a tremendous impact. Cinema can give you the impression of having an experience. A film can fix those memories, so even if you weren’t there to have the experiences, you can still access them, and by doing so, you can unlock that memory. It’s a medium that gives you a vivid presentation of a certain reality, which is not to say that reality can’t be manipulated into a game, such as the case with “Mulholland Drive” and “Memento.”

LEO: How did your collaboration with Doherty on “Cinematic Remembrance” develop?
RD: I met Willie through Suzanne Weaver (Speed’s curator of contemporary art). We got to talking about movies and working with film crews. From that conversation, and others, memory as a theme resurfaced from time to time — both in his work and in other films I’m interested in. We identified 15 to 20 films for the series, and with that tried to represent different eras, countries, various genres. And it was whittled down to these eight, a brief international survey of art-house filmmakers, all who have made films relating to the idea of memory and cinema, a theme that is consistently explored through art.

Disclaimer: Mali Anderson has collaborated on the publications of many cultural institutions, including the Art Institute of Chicago, the John Michael Kohler Arts Center, The Moth, and The Speed Art Museum.

‘Cinematic Remembrance: Memory and the Movies’