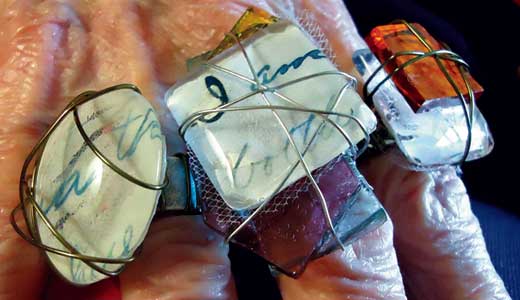 Star-crossed lovers separated by war, an undying romance fueled by passion and tinged with the heartbreak of separation — sounds like the stuff of a great Hollywood romance. But for Meghan Coomes, this is the foundation of her grandparents’ love story, part of her own family history as well as the history of America.

Fascinated by her grandparents’ World War II romance, symbolized by the daily letters they exchanged for the entirety of their three-year, three-month and four-day separation, Coomes decided to create a tangible testament to their steadfast devotion, taking snippets of the letters and transforming them into pieces of wearable art.

Coomes’ jewelry is exquisite to begin with. All chunky colored glass and twisted copper wire, these are bold, one-of-a-kind statement pieces that dazzle with a unique aesthetic. But it’s the story behind the jewelry — the scurrying cursive peeking out from behind the glass tiles — that really sets Forever Yours Agnes apart from other jewelry lines.

Primarily a freelance television producer, Coomes started off making jewelry from the letters purely for her own enjoyment, as a way to pass the time between projects. “I’ve liked making jewelry in the past, and I like it being very personal … My grandma has always talked about all these letters, (and I) just think they’re so beautiful,” she says. “I wanted to make something from that, as a reminder of my grandparents (and) of that part of history and their story.”

The initial pieces included her grandmother’s bright pink lipstick kiss, still vibrant after more than 60 years, and her signature “I am forever yours, Agnes,” which inspired the name of the jewelry line. Coomes soon began expanding as she received compliments from family and friends who were enthralled by the pieces and their unique back-story. Eventually, she contacted a friend who ran a vintage shop in Nantucket, Mass., where Coomes was living at the time. The woman’s enthusiasm, both as a friend and as a retail professional, really kick-started Coomes’ business. “She was the catalyst for my confidence to really try it out and try to sell it,” she says. “I trusted her opinion … it planted a little seed of confidence that maybe I could sell it somewhere else, too. So that was how that whole snowball started and got going.”

So far, Coomes has limited herself to one letter, No. 251, written by her grandmother on New Year’s Eve 1944. She says she fell in love with the language, phrases like “Hopefully you’ll come marching home to me dearest,” “I’m missing you always” and “I didn’t see you the entire year of 1943.”

“Gosh, that just seems like a lifetime ago!” Coomes says.

The letters are carefully constructed, full of longing and love but also strategy. As Coomes reveals, “Because everything back then was top secret, they would check the letters to make sure they weren’t divulging any details of where they were, stuff like that. So (my grandpa’s) first sentence, the first letter of those words would spell out the city in Germany where he was at the time. So she’d always know where he was.”

Thomas Coomes and Agnes Stevens’ letters are emblematic of a different era, a time without GPS, email or Skype, when a few sheets of paper were the only proof young Agnes had that her beloved fiancé was alive. Coomes feels an obligation to preserve not just her grandparents’ story but also the lost art of letter writing and the atmosphere of this bygone era. “I think this is a dying form of communication, unfortunately. I was just telling my boyfriend, ‘I want to make stuff out of a letter you’ve written me, (but) unless I print out text messages or emails …’ He’s written some since then,” she acknowledges with a smile.

Coomes’ grandfather passed away, but her grandmother, the Agnes of the letters, now 89, is thrilled by her granddaughter’s work. Hers is a touching love story, full of wholesome charm, but, as Coomes reiterates, “It’s not only our family’s history — (it’s) part of our world history and our country’s history … three years, three months and four days exactly. And they wrote every single day.”

Forever Yours Agnes jewelry is available at Glassworks, the Speed Art Museum Shop and Sister Dragonfly. Coomes will also have a booth at the Highlands Festival Saturday. Check out www.foreveryoursagnes.com.