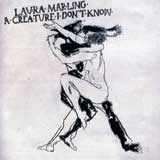 Laura Marling is a performer, but not in the way we usually talk about musicians (especially female vocalists) as being performers. She’s not a performer in the way that, say, Lady Gaga is, where you almost need to see the costumes and the dancers and the elaborate sets to get the full sense of the music. Instead, when Marling performs the beautiful folk-pop songs on her new album, she infuses each word with such meaning and expression that I can envision every facial expression and gesture: Lyrics become monologues. Her voice subtly accents and arches over notes; she stretches and broadens a single note, only to exhale the next phrase in one rushing breath. And she has this way of breaking from the melody ever so slightly so that it sounds conversational, almost laughing. It’s all incredibly mature and has drawn comparisons to Joni Mitchell, who released her first album when she was 25 years old. This is Marling’s third album; she turned 21 earlier this year.