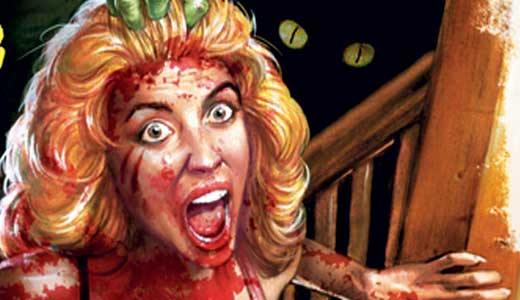 In the annals of MST3K — a show that celebrated the worst movies anyone has ever seen — only one was acknowledged as being the worst: “Manos: The Hands of Fate.” A regional one-shot oddity from Texas, the slim plot involves a family trapped in a farmhouse with a strange, stoned-out cretin named “Torgo” who cares for a vampire and his coffin-sleeping brides in the basement. But that description doesn’t begin to explain why this movie is so completely, insanely and wonderfully awful. You simply have to see it for yourself! Oh, we almost forgot: This set includes some of their best bonus goodies ever, including a complete, uncut version of “Manos.” Don’t miss this!

Oh, man! This is soooo cool! “The Basement,” filmed on Super 8 and never released to video before (or most theaters), is a classic ’80s indie horror film about four people forced to relive the horrible deeds … that they have yet to commit! The set contains four other indies — “Captives,” “Video Violence 1,” “VV2” and “Cannibal Campout” — all gathered on three DVDs with lots of great DIY bonus tracks plus a VHS copy of “Basement.” The icing on the cake is the neat retro “big box” VHS-style packaging with artwork by Vince Evans. We’re about to bust a nut!

Trying to define what constitutes “the greatest martial arts movie ever made” would be a fool’s errand, but this comes as close to it as we’ve ever seen. Made during the Shaw Brothers heyday, this legendary Sun Chung-directed tale has an amazing script full of intelligent, thoughtful dialog (a rarity in such movies), the characters are tragic but well motivated without being stereotyped, and the action sequences are simultaneously over-the-top and brutally realistic. We haven’t mentioned the plot because we are out of space, but if you are a martial arts fan, please don’t let this one pass you by. Recommended.

Our vote for the best drama on TV today. Tom Selleck broods over a family of cops in NYC, including son Donnie Wahlberg who is married to Bridget Moynahan, and dad Len Cariou. With all this screen talent, the studio didn’t scrimp on the script, either. Well written, unpredictable and powerful without being preachy. Recommended.

Daniel “The Dumb One” Baldwin joins James Russo and Brad Dourif for a crazy-fun horror/chiller outing. Lots of people have disappeared or died over the years near Prophet Hills. But the reason is far more evil than anyone suspects. A dumb, laughable, old-school creature-feature in the best sense.

A documentary on Conan’s “Legally Prohibited from Being Funny on Television” tour, which took place after he was booted from “The Tonight Show” when Jay Leno wanted his old gig back. The humor is pure O’Brien, but far angrier, riskier and less predictable thanks to his obviously seething rage at being mistreated by the industry in general and NBC in particular. One of the best comic-docs you’ll ever see.

A popular Oscar-nominated art-houser in which a mother’s last wish sends a pair of twins to the Middle East to discover their family’s history. There they are shocked to find their own lives are the product of never-ending war, racism and hatred.

SPARTACUS: GODS OF THE ARENA

The Starz Channel had to think fast: Andy Whitfield, the star of their “Spartacus” franchise, needed to undergo cancer treatments. How to keep it going in the meantime? Why, with a Spartacus-free, six-episode prequel set in the gladiator training camp of Quintus Batiatus (John Hannah). The real stars of the series are, of course, sex, blood, mayhem, nudity, gore, savagery, murder, tits and violence — all of which continue to get close-ups.

Roger Ebert famously called this “a sick example of the almost unbelievable descent into gruesome savagery of American movies.” You betcha! This watermark in the vigilante genre stars Robert Ginty in the Charles Bronson-like role of a Nam Vet who goes postal on the low-life scum of NYC after a friend is brutally beaten. Co-stars Christopher George and Samantha Eggar, and now available in a fully restored Blu-Ray Director’s Cut from our buds at Synapse Film. Enjoy.

Julie “Frida” Taymor’s Oscar-nominated revisionist take on the Shakespeare classic, changing the lead character into Prospera, a woman, played to perfection by Helen Mirren. The great casting continues with Djimon Hounsou as Caliban and Felicity Jones as Miranda. A fine new telling of the classic tale of villains, lovers, fools and power.

We were big fans of the old Thor comic books (back before they became “graphic novels”) and still have several scores of them tucked away somewhere. But we always considered them unfilmable, which is why we were so keen to see this big-screen outing. It’s a tough sell, but the filmmakers (including director Kenneth Branagh) pull it off by moving the action from Olympus, dropping an impotent Thor (Chris Hemsworth) into the big city. Our only complaint is that Natalie Portman has little to do while too much time is spent on Anthony Hopkins, Jaimie Alexander, Samuel L. Jackson, etc. But, yeah, we liked it.

Directory Matthew Vaughn plays havoc with the accepted genesis of the Marvel X-Men in this prequel to the Bryan Singer-spawned series, but we won’t pick nits. A great cast, including James McAvoy and Michael Fassbender (Charles Xavier and Magneto, respectively), Kevin Bacon as a very bad bad-guy, Louisville’s own Jennifer Lawrence as Raven/Mystique, and January Jones as a kick-ass Emma Frost would guarantee a great time by themselves; but the plot, centered around real, historical events, gives it all the necessary over-the-top scale. Excellent.