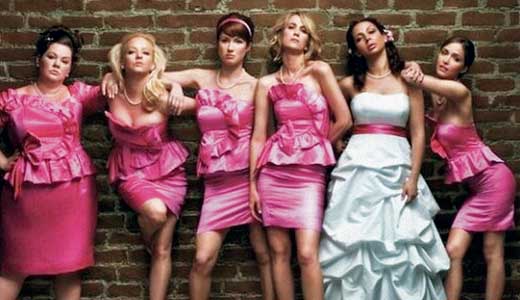 This year will be remembered as the year of the wedding picture. At last count, there have been more than a million of them (OK, maybe it just seems that way), but this is the only one that rose above its chick-flick roots to become real entertainment. Kristen Wiig leads a great cast as the head bridesmaid for BFF Maya Rudolph. But fate and Rose Byrne have other plans in this well-written and raunchy old-fashioned comedy. Damn funny, with Melissa McCarthy from “Mike & Molly,” Wendi McLendon-Covey, Chris O’Dowd, Jon Hamm and more.

Fans of “The Daily Show With Jon Stewart” will recognize Aasif Mandvi as the star of this comic tale of a chef who dreams of leading some tony Manhattan restaurant, only to get stuck working in the family’s bankrupt cookery in Jackson Heights. Better yet, it co-stars local cutie and River City Players alum Jess Weixler, who graduated Atherton High in 1999. Watch for her in “Free Samples” with Jesse Eisenberg later this year, and “Lumpy” with Justin Long sometime in 2012 — she’s terrific!

A good, old-fashioned, low-budget monster flick. Tired of all the public speculation, the Air Force allows two reporters to visit the base to prove that there are no aliens living there. But one of the aliens living there disagrees. Scary fun.

A look at the beautiful, forgotten villages of Mexico as seen by members of a generations-old family circus struggling to survive in the modern world. The music of Calexico runs throughout. Simply terrific.

The 70th Anniversary Special Edition Blu-ray/DVD combo release of — in our humble opinion — Uncle Walt’s most moving motion picture. As kids in a darkened theater, we recoiled in horror as Dumbo’s mom was locked away for trying to protect her little one. And we remember screaming happily as the big-eyed, big-eared pachyderm learned to fly with the aid of a fast-talking mouse and a “magic” feather. It’s a shame kids won’t have memories like that any longer, but thank God and Corporate Drones they can at least own the DVD.

This was the first-ever Mike Hammer TV series, now available for the first time on DVD. Most of the episodes were written by novelist Spillane himself, and all starred Darren McGavin as the hard-nosed, sadistic and usually drunken PI whose abuse of women seemed only to make him more lovable. Dames! Go figger. Cited at the time as the most violent show ever put on the air, it was a smash hit in 1958-59 and made a star of McGavin. Very entertaining.

A truly warm and welcome comedy about two exceedingly fat people who simply want to be loved, just like the rest of us. Stand-up comic Billy Gardell channels Jackie Gleason at his boisterous best, but does it all with so much heart that you can’t help but love the big lug. And as his girlfriend, Melissa McCarthy shows great comic chops, especially when trying to be supportive of the clearly clueless Mike. We’ve never seen a better — or funnier — sitcom.

A wonderfully earnest no-budget action/monster outing set in a blazing national park. As firefighters try to contain the damage and save endangered wildlife, at least one large, hairy bit-o-wildlife endangers the firefighters. Neat.

This little-known late-’80s horror flick is a no-budget hoot from director Juan Piquer Simón, who also made such legendary dreck as “Supersonic Man,” “Mystery on Monster Island” and “The Pod People.” It’s your basic “thousands of slimy mutated man-eating slugs kill people then move on” churner: no explanations, no social commentary, no highfalutin ax to grind. Brainless movie mayhem at its finest. Enjoy.

Fans of Pratchett’s “Discworld” novels will recognize this immediately. Based on his 33rd entry in the franchise, this lavish, two-part, made-for-limey-TV miniseries follows the adventures of con artist Moist von Lipwig (Richard Coyle), who gets conned into accepting the post of Postmaster General in Ankh-Morpork, an impossible position that hasn’t been filled in years.

This is that eight-part miniseries the Kennedy clan tried to keep off the air. Not really worth all the hoopla, but a good, solid modern bio-drama with Greg Kinnear as Jack Kennedy, Barry Pepper as Bobby and Katie Holmes, doing a surprisingly good Jackie.

THE STRANGE CASE OF ANGELICA

This enchanting — if kinda weird — movie from Portugal has been an art-house sensation. A Sephardic Jewish photographer is dragged out of bed during a raging storm to take a picture for a wealthy man. The subject? His breathtaking young bride, now dead — smiling, still in her wedding gown. The photographer becomes enchanted with the image, imagining that she opens her eyes and lives again. But that is just one of the rare joys in this masterful visual puzzle.

As readers of this column (and at least one court-appointed mental health professional) can avow, we are big fans of the Shaun the Sheep clay-animated kid’s series. This “Timmy Time” spin-off for younger kids is equally fun and probably violates our parole as well. In this one, Timmy teaches the noisy Paxton how to hide quietly — too quietly!

WE ARE THE NIGHT

A much sought-after German import about a trio of sexy female vampires who recruit a youthful new member, played by Karoline Herfurth, best known for her work in the underrated “Perfume: The Story of a Murderer” (2006). Nothing new, but head and shoulders above all that tweeny “Twilight” crap.

Unless you’ve been living in a cave for the last few months, you already know that on Friday, Sept. 16, George Lucas will finally release the entire six-movie “Star Wars” saga to Blu-ray in North America. Of course, a lot of people have been bitching in anticipation of this release: George’s trips to the well have become so common that the path is now deep, muddy and slick. But, instead of selling each movie individually — which would have been far more profitable — he has grouped them into three sets: The Original Trilogy, The Prequel Trilogy, and The Complete Saga.

But first, to answer a question everyone is asking: While we haven’t had a chance to see all of the material, it appears that these are not the original theatrical releases. They contain the damnable diddling-with that Lucas inflicted on them for their last trips to the theater — if not a bit more. It would have been nice to watch the Blu-ray releases in a selectable “original theatrical” mode, but that is, apparently, not to be.

The Original Trilogy begins, of course, with “Episode IV: A New Hope” — originally titled simply “Star Wars.” Say what you will, this 1977 flick is a cultural touchstone for a generation — and it was fun! We were there at Showcase Cinemas on Bardstown Road, seated front-row center on opening night. (Not because we wanted to, but our dates were late and it was either that or nothing.) An old-fashioned, rollicking, swashbuckling adventure played out amongst the stars, complete with talking robots and young men yearning to spread their wings and find their destiny. This was followed by “Episode V: The Empire Strikes Back,” which darkly revealed that Darth Vader was Luke Skywalker’s father. The series was then capped off by “Episode VI: Return of the Jedi” in which the evil emperor is overthrown and Luke’s goodness saves his father’s soul. Oh yeah: And teddy bears bring down the Empire. A total of three discs in the set, along with all the bonus material from previous incarnations, plus some new stuff.

This trilogy begins with “Episode I: The Phantom Menace,” released a full 22 years after “Episode IV.” It was now a different time, a different adventure and, frankly, a different George Lucas. He was no longer a young man dedicated to the spirit of the adventure serials of old, but someone who wanted to create a backstory worthy of his own now-famous original creations. This led to extremely bad dialogue, long stretches of wallowing in palace intrigue, and something called “midi-chlorians.” Not that it all wasn’t fun, but the public had changed, too. Our expectations were too high for anyone to satisfy. “Episode I,” largely an exercise in setting up the new trilogy, introduced Jar Jar Binks, whom no one wanted to see. By “Episode II: Attack of the Clones,” the pieces are being positioned on the chessboard. We see the illicit love between Hayden Christensen and Natalie Portman — and are introduced to Christopher Lee’s evil Count Dooku, whom Yoda nimbly battles. Finally we come to “Episode III: Revenge of the Sith”: After catching us up on all the characters and action (including those from Lucas’ “Clone Wars” cartoon show), he springs the trap, turning everything lose, letting it proceed to the slam-bang — and brutally painful — birth of Darth Vader from the literal ashes of Anakin Skywalker — and the hiding of his children, Luke Skywalker and Princess Leia Organa.

This is the set we recommend. It contains everything from the two Trilogy sets, plus additional bonus material — about 40+ hours of it! This includes the “Star Wars Spoofs” — fan-created tributes and jabs at the mythology (and George Lucas himself), many from the Internet — and “A Conversation With the Masters: The Empire Strikes Back 30 Years Later,” with commentary by Lucas, Irvin Kershner, Lawrence Kasdan and John Williams. Best of all are two complete discs full of archive material: deleted, extended and alternate scenes; props, maquette and costume development; original concept art; cast/crew interviews; and more. This is the definitive “Star Wars”-junkie collection.