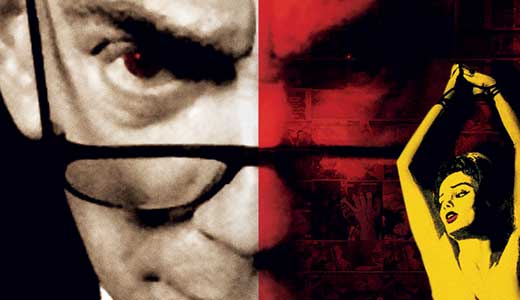 A long overdue and very welcome doc on the man who changed movies forever. Herschell Gordon Lewis was a well-known provocateur in the world of “Nudie Cuties” — those silly skin-flicks that dominated the drive-in fare of the early 1960s. But the competition was fierce; he needed something new and shocking, and thus created “Blood Feast” (1963), the world’s first gore film. But what really made Lewis’ films so successful was that they were so damn stupid — and the acting was so bad — that you couldn’t help but be entertained. This doc includes lots of clips and tributes from such luminaries as John Waters and our buddy, Joe Bob Briggs. Simply wonderful.

Finally available in a loving boxed set — including Blu-ray! — a trio of Herschell Gordon Lewis’ groundbreaking gore films. The first, of course, is “Blood Feast” (1963), a movie about a crazed caterer who serves nubile cutie cutlets. Yum! “Color Me Blood Red” (1965) tells of an artist who tries to impress a snooty critic by painting with his own blood … until he runs low. But the best of the bunch is “2000 Maniacs” (1964): A carload of friends on vacation in the South stumble into a town of jolly Confederate ghouls who come alive periodically to torture, kill and eat Yankees — all to a great bluegrass soundtrack! An absolute must-own.

A BIG BOX OF VAMPIRES

If you need a review of this, then you REALLY need to go back to the old country. This nicely restored 50th anniversary Blu-ray edition finds Charlton Heston in all his chariot-racing, 11-Academy-Award-garnering glory, along with a barge-load of extras and commentary — including the rare 1925 silent version. (FYI, Heston wasn’t the studio’s first choice; Burt Lancaster, Paul Newman and Rock Hudson all turned them down.)

An unusual anime series about an unseen world of undead creatures who exist right next to us without our knowledge. But when someone dies with intense regret, this leads them to become an undead danger to our world. That’s when a group of monks go into battle with the help of the Shikabane Hime — scantily clad teen babes with big eyes and huge boobs. Duh.

EINSTEIN: THE MAN BEHIND THE GENIUS

Today all we remember of Einstein is E=MC², but he was one of the great humanitarians of the 20th century and a dedicated pacifist whose influence quietly changed the course of history. This one-man show stars Steve Polinsky as the man who gave us the key to the stars and a path to heaven on Earth.

A real nice blend of cyber-babble, leggy wannbe-starlets and old-fashioned sleuthing, starring Sara Fletcher and Kelly Noonan. Fletcher goes undercover to prevent the release of a sex tape made by her cousin, Noonan. With Leah McKendrick from “The Last Lovecraft: Relic of Cthulhu.”

You read that right, all 200+ episodes from 11 seasons on 32 discs — almost 100 hours of terrific lowbrow anti-sitcom humor — for about $1.25 a disc! What’s the catch? They’re all in one cube-case on a single spindle, not the usual one-case-per-season format that we’ve come to know. If that doesn’t bother you — and it doesn’t bother us — have at it!

A fun Halloween outing from the MVA gang. Reese “Ginormica” Witherspoon and the rest of her colorful CGI buds — Seth Rogen, Hugh Laurie and Will Arnett — visit her hometown and discover that something is very wrong with the local jack-o’-lanterns.

Veteran action-actor Sean Bean can’t seem to escape “The Lord of the Rings,” having now appeared in scores of low-budget mediaeval sword-and-ham flicks. This one throws in a soupçon of “future wasteland world of genetically mutated monsters” for spice, and some Annabelle Wallis (“The Tudors”) as eye candy. Better than you’d expect, since it was made for the SyFy channel.

One of the most legendary — and least seen — silent movies of all time, now available in a Blu-ray/Criterion edition. An old Swedish legend says that the last person to die on New Year’s Eve must take the reigns of death’s charnel chariot for the coming year. That fear drives director/star Victor Sjöström, a drunken, callous cad, to reconsider his life after meeting an angelic Salvation Army sister whom he may have doomed. Ingmar Bergman has often said that seeing this movie was the turning point in his life; forever after he dedicated himself to the pursuit of cinema. Our highest recommendation.

Carrie “Princess Leia” Fisher, daughter of Hollywood royalty, left acting long ago to become a full-time alcoholic. But her clever wit and knowledge of film lead her to a new career as a “film doctor”: she quietly added great dialogue — and amazing humor — to scores of lackluster scripts, including some of your favorite movies. This is a doc/performance-piece based on her one-woman show in which she therapeutically exorcizes her personal demons — and skewers many of Tinseltown’s movers and shakers in the process. The gal has a gift.