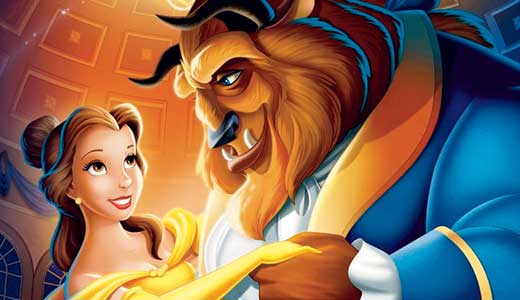 Beauty and the Beast

BEAUTY AND THE BEAST

When we’re not busy being God’s snarky, über-sophisticated gift to video reviews, we’re ordinary beer-spilling movie-slobs like you. So what do we watch for pleasure? Great stuff like this excellent Disney musical take on the classic tale of a beautiful girl who sacrifices her own freedom to save her father from a horrible beast. Angela Lansbury makes a great teapot and Jerry Orbach shines as the singing candlestick. One of the greatest movies ever made, now in a wicked five-disc Blu-ray and 3-D combo set, with additional material.

Simply put: The Greatest Movie in History — now available in 3-D! The story, borrowed from Shakespeare’s “Hamlet,” is superb and the music excellent, ranging from catchy tunes to unforgettable melodies with insightful, haunting lyrics. Computer animation melds seamlessly with hand-drawn Disney masterwork to produce a living tableau of life and death and rebirth. It’s a breathtaking personal journey, played out in caricature, pantomime and ochre. And it’s fun! What more could you possibly want?

A moving documentary on Buck Brannaman, the real American cowboy behind the movie “The Horse Whisperer.” Horribly abused as a child, he refused to use whips on horses, learning instead how to empathically connect with the powerful and gentle creatures. He now travels the world teaching others how to do it. A big hit at the 2011 Sundance Film Festival.

Without peer as the most outrageous — and funny — horror movie ever made! Then-unknown New Zealand director Peter Jackson (“Lord of the Rings”) throws all sense of proportion out the window as his hero (Timothy Balme) resorts to grinding his zombified relatives into pulp with a gore-covered lawnmower! All the while trying to hide his family’s, er, “dysfunction” from his new girlfriend! By the time his monstrous, 20-foot-tall grandma tears the roof off the house, you’ll be howling (and looking for dry shorts). A must-own, now on Blu-ray!

DRACULA: THE VAMPIRE AND THE VOIVODE

A fun little documentary on the “true” history of Bram Stoker’s “Dracula,” with lots of spooky recreations. (FYI, voivode is Slavic for “leader of warriors.”)

Vin Diesel’s “Fast and Furious” franchise has never been accused of being entertainment suitable for Mensa meetings, so we were surprised to discover what an intelligent, kick-ass flick this is! Despite co-starring Dwayne “The Rock” Johnson, they played it smart by dropping the now-dated “street racing” theme in favor of a heist-caper with hot babes. Paul Walker returns, joined by Jordana Brewster, Tyrese Gibson, Chris “Ludacris” Bridges, Elsa Pataky and more. Entertaining as hell.

A fun, no-budget love letter to George Romero, about friends who gather together to help their rotting pal stop eating people and check into Zombie Rehab. Doesn’t go well. (Recommended drinking game: Take a shot for each Romero-created character or place-name you spot.)

A fun, no-budget drama that mashes together zombies and “The Santa Clause” from indie auteur Sean Cain. At Christmastime, a cuckolded L.A. police officer is about to walk out of his marriage and drop his police partner when a viral outbreak traps the three together, forcing them to fight for their lives.

THE CAPTAINS: A FILM BY WILLIAM SHATNER

Shatner wrote, directed and starred in this wicked look at the five other men and women who have occupied the captain’s chair during 40-plus years of the “Star Trek” franchise: Patrick Stewart, Avery Brooks, Kate Mulgrew, Scott Bakula and Chris Pine. Actually, the whole thing is about Shatner, but that’s not a criticism. Kewl, goofy and irreverent.

THE PEE-WEE HERMAN SHOW ON BROADWAY

TRANSFORMERS: DARK OF THE MOON

“Transformers 1” was fun, No. 2 was horrible, so what about No. 3? Better than No. 2 by a long shot, but not as fresh as No. 1. And we kinda missed Megan Fox’s ample butt, but her replacement butt, undie-model Rosie Huntington-Whiteley, provides tight, skinny coverage of that plot point. Shia LaBeouf — no longer in danger of cinematic overexposure — returns to slide down a quickly tilting skyscraper in the extended, eye-popping battle climax. Gangs o’ Big Noisy Fun.

The peripatetic peppers and peas back off a bit from their usual Christian proselytizing in favor of a surprisingly inclusive and secular — and entertaining — trio of Christmas tales. Two of them focus on America’s rampant seasonal consumerism, while the third uses two dueling pageants to teach a lesson about love, cooperation and sharing. The latter is just a bit preachy, but less so than their usual fare.

Our buddy Weird Al returns to the live stage for a long overdue mash-up and reprise of his best stuff, including “Perform This Way,” “White & Nerdy” and “Amish Paradise.” With a cameo by Phil Collins.