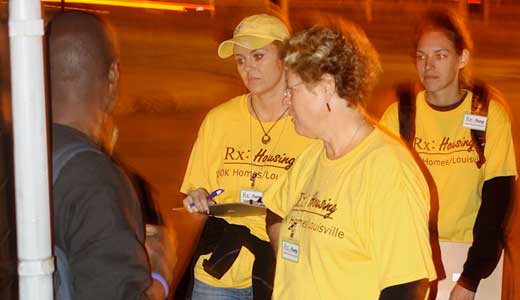 It’s 4:30 on a Monday morning when 51-year-old Kenny wakes to a soft, diffused spotlight bobbing for his attention. He’s wedged in the seam of a steep hill and an I-65 overpass. Steel beams make up his bedposts, a slab of concrete, his mattress.

“Anybody home?” asks a man halfway up the slope. “We’re with a homeless outreach team. Can we talk to you for
a minute?”

Only crickets respond. Nearby, another sleeping man bounces up and shoves his belongings into bags, fearful that a cop is behind the flashlight and kind voice.

Eventually, Kenny lifts his head from the yellow seat cushion he uses for a pillow. The voice belongs to Pat McKiernan, the homeless veterans outreach coordinator for the Kentucky Department of Veterans Affairs.

He’s one of about 100 volunteers reaching out to seriously ill homeless individuals who cycle in and out of jail, hospitals and shelters, racking up taxpayer-funded bills that can exceed $50,000 a year, according to University of Louisville researchers who tracked the cost of homelessness for a 2008 study. (Of the 9,000 homeless individuals counted in Louisville in 2010, it is estimated that a couple hundred suffer from numerous health-related issues and make up that small, costly group.)

The study found that when those needy individuals are placed in permanent, supportive housing, their hospital and shelter visits drastically decrease. They are enrolled in food stamp and Social Security programs. And while it may seem crude to assign someone a dollar value, in terms of savings, the same category of person costing the community $50,000 on the street costs roughly half that once in a more stable, permanent housing situation.

For three days, volunteers will canvas Louisville, surveying the homeless as part of a nationwide campaign known as 100,000 Homes. Since the campaign’s 2003 launch in New York City, 98 other cities have signed on to try and get 100,000 of the nation’s most vulnerable homeless off the streets and into housing by 2013. Louisville’s Coalition for the Homeless has a goal of housing 75 to 100 through the initiative, with vouchers allocated for veterans, families and other longtime homeless men and women.

McKiernan, holding a clipboard and flashlight, convinces Kenny to take part in a survey that will gauge his physical and mental health. Kenny, still sleepy, wipes his face with his hands to clear the fog.

“How many times have you been in the ER in the last three months?” McKiernan asks, competing with the roar of semi-trucks overhead.

“How many times have you been hospitalized in the last year?”

“I try to stay healthy,” Kenny says, reporting that he doesn’t abuse drugs or alcohol, and has never suffered from heat stroke, frost bite, diabetes or kidney disease — common ailments among those on the street. Plus, he says, he’s only been homeless six months.

Kenny probably won’t score high on the vulnerability index, and that may land him toward the bottom of the housing priority list. Individuals on the lifelong sex offender registry and those with violent criminal pasts may also have trouble securing housing as part of this initiative. Section 8 housing vouchers given by the U.S. Department of Housing and Urban Development come with restrictions.

“I don’t know what the community wants to do about that population,” says Natalie Harris, executive director of the Coalition for the Homeless. “That’s a bigger issue … that we have to figure out. These people with crimes, what are we going to do with them?”

Harris anticipates that most of the homeless people they encounter over the three days won’t have pasts that pose a barrier to housing.

The key, she says, is locating those most in need, keeping track of them until they can move into an apartment, and ultimately making sure the support is there so they don’t slip back to the streets.

Individuals categorized as highly vulnerable as part of the 100,000 Homes campaign will likely be in housing by winter, no questions asked. They will participate in a “Housing First” program that began in Louisville in 2008. Unlike traditional homeless-to-housing models, treatment for addictions, job skills training and other transitional programs are not required. That multi-step approach can be helpful for some, but often loses the very ill, chronically homeless who struggle with those requirements.

Instead, a case manager with a low client load provides time and support, but does not demand an end to certain behaviors, like drinking or drug use. The apartment, in theory, motivates change.

In Louisville, a $2 million, five-year federal grant from the Substance Abuse and Mental Health Services Administration has helped pay for the 112 individuals who’ve entered into Housing First in the last three years. A May 2011 report by Phoenix Health Center, one of the agencies involved in the program, shows some success in curbing destructive behaviors.

Clients with depression, anxiety or other mental illness didn’t show much improvement in their condition, but it did not get worse either. Visits to the ER for mental or physical problems did drop, reducing those expensive indigent care costs.

Rod Barber, who led the 2008 U of L study, says decreasing visits to University Hospital and Central State Hospital is the best way to curb the costs of homelessness. Of the nearly $89 million spent on shelter care, corrections and other homeless services in 2004 and 2005, inpatient, outpatient and emergency room use accounted for 47.6 percent.

Other cities, including New York, Denver and Quincy, Mass., have also reported cost savings once a Housing First program was implemented. In Quincy, near Boston, organizers say their chronic homeless population fell by 56 percent. Emergency room visits by these individuals dropped by 83 percent. But Barber says it’s time to look longitudinally, beyond cost savings and into clients’ lives.

“I think one of the big issues now is developing a research agenda to figure out if this works,” Barber says.

He’d also like to look at retention rates of Housing First. In Louisville, 35 participants have exited the program, 11 for medical reasons, the rest for everything from lease violations to incarceration.

In order to expand Louisville’s Housing First program, more money is needed. Natalie Harris says she’s still waiting on the official word from the Substance Abuse and Mental Health Services Administration on a grant that will fund case management for those housed as part of the 100,000 Homes initiative. If it’s not awarded they have a backup plan.

On the first morning of 100,000 Homes, she tallied 46 homeless persons contacted by volunteers on the street, a good amount, especially considering the rain.

As for Kenny, it’s unclear what led him to nights spent under a highway. He says he works, but doesn’t say where. He says he had a home, but no family. The questionnaire doesn’t get into personal history.

But it’s sparked thoughts about his future. As volunteers hand him a plastic bag with water, pretzels and a Kroger gift card, Kenny thanks them, pauses and looks down at his worn comforter.