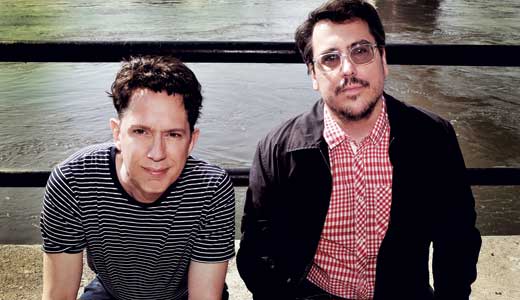 They Might Be Giants’ John Flansburgh — the tall John of the group — is calling from his house in the Catskill Mountains of New York.

“We just finished two albums, and I just finished (producing) this Jonathan Coulton project as well, so my outbox is full,” Flansburgh says. Is he exhausted? “I’m kind of invigorated! It’s actually kind of an exciting moment — the songs are getting really good responses, kind of exceptional responses. You never know how things are gonna be received, or if the timing of what you’re doing is gonna be in sync with the world, but it feels like there’s a lot of interest — interest that has been dormant for a while.”

Join Us, the group’s 15th proper album, was released in July. It’s their first album for adults since 2007. The band, known for its prolific assortment of humorous, nerdy songs, has been the subject of a feature-length documentary, won two Grammys and, presumably, made a healthy amount of money writing the theme song for TV’s “Malcolm in the Middle.” They have also spent part of the last decade creating albums for kids and their Raffi-hating parents.

“In the last few years, we’ve been doing these family projects. We’ve kind of been off the scene for a while, in that radio sense. So it’s really interesting now — ‘They Might Be Giants on the radio? What?’ We have to make a video! No one’s said, ‘You have to make a video for your song,’ in like 10 years! The era of the rock video ended a long time ago — except when your song is getting played on the radio,” Flansburgh says. “So we’re rejoining Rihanna in the weird world of having to make videos. It’s kind of exciting. It’s always nice to have new material and be going out on tour, but … I don’t know, maybe the world’s catching up with us again.”

Flansburgh suggests that part of the secret to They Might Be Giants’ longevity is their inability to achieve the kind of success that Guns N’ Roses and Britney Spears found.

“I know where the money is — it’s not in music! Everybody can just relax. We figured out a way to not be broke. Getting through this world without being broke is still occasionally a struggle. Just being on the road is very expensive. I can’t believe how much money we can generate and still not be profitable. That’s the ultimate weird thing — we do very well in the U.S. in terms of live shows, but the expenses are just brutal. It took us a long time to get to where normal bands are — it took us a long time to graduate to a bus. We were in the van for 10 years.”

They Might Be Giants have been a thing since the early ’80s. “I would have a hard time recreating our early stuff,” Flansburgh says. “There’s some things about it that seem vaguely dated. I just don’t have that much love for gated reverb.”

The two Johns who lead the group have seen many eras come and go, surviving by doing
only what makes sense for them at the time.

“We’re the worst judges of where we land in the culture. I don’t know anything about how we’re understood, or misunderstood — there’s part of me that … I get why we can do what we do, but I can’t imagine trying to explain that to a teenager. So much of music is caught up in identity politics, people are so concerned with whether people are truly ‘livin’ it.’

“I remember somebody on the road crew, in the early days of Marilyn Manson, saying he really liked him because ‘Manson was livin’ it.’ I just thought, like — living what? We are truly living the mild, lightly depressed, adult, prosaic lives that we explore in our songs.”

Flansburgh may be a veteran, but he’s still seen as a misfit in popular music. “It’s always struck me as really unfair that, if you’re in a band, you’re in competition with Prince. I can’t compete with Prince! Prince and I are the exact same age. He’s tiny, but loud — he’s an impressive dude, he’s like a superhero! It’s like being in competition with Thor. What we have to offer is so different from what’s being offered by so many others.”