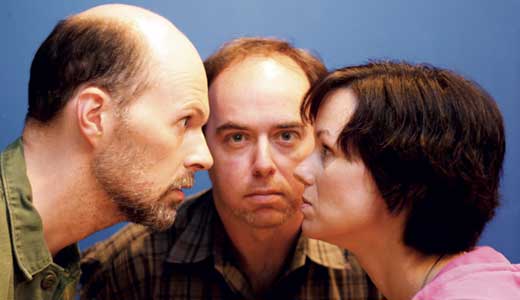 Three clerks are marooned on a deserted island. One works at a record store, one a video store and one a book shop. Which five things — albums, books, movies — would each take along in exile?

The idea for this skewed original comedy was born from the recent upheavals in the bricks-and-mortar media industry — Borders shuttering all of its retail outlets and the highly debated Netflix price increase this summer, among others — news the three actors followed with both concern and bemusement.

“While we’re not doing an agitprop ‘buy local’ show in any way, that’s where the idea came from,” Maupin says. “What happens to the over-educated bookstore guy, record store guy, video store guy when it’s all gone? What do they do, these people who have this very specialized information?”

All Le Petomane original plays are collaboratively written, directed, choreographed, designed and performed by the participating members of the ensemble. Due to schedules and predilections, “5 Things” will be a three-person show.

“This is something the three of us lean into, this kind of geekery,” says Bailey Maupin, a self-professed book nerd. “Every time I meet someone and I go to their place for the first time, I look at their books. ‘Oh, you have ‘Watership Down.’’ ‘Ohhh, you have Hemingway.’”

The “top five desert island list” is a familiar game for pop culture nerds, immortalized in Nick Hornby’s “High Fidelity” but practiced for generations by those who not only enjoy categorizing and prioritizing their favorites but also — and perhaps more importantly — love to argue about taste.

“But if we include a reference that we know is a little more obscure, it becomes important that the bit is actually funny, not just a little chunk of esoteric whatever that we’ve included,” Ware says.

And so that cultural knowledge is built into the fabric of the show, using each member’s particular strengths. Ware will play the video store clerk, and Maupin will portray the music geek, but the three actors will also play the record player, the movies on the TV screen and the chair in which the books are read. Inventive physicality is a hallmark of a Le Petomane production, and their original choreography ranges from acrobatics to lyric dance, depending on the requirements of the play and scene.

During a recent rehearsal, Bailey Maupin, Maupin and Ware struggled with the most effective and evocative way to portray a man listening to a record player using only their bodies and the audience’s imagination.

While Maupin served as listener (suggested headphones mimed), Bailey Maupin formed the turntable’s base as Ware tried out hand configurations meant to simulate an arm and needle. The middle finger is easiest and works best, they agree, but it also sends an unintentionally rude message. Similarly tricky is Bailey Maupin’s dismount from her reading chair, the base of which is formed by Ware and the back by Maupin. They try several sequences of movement before they land the one most seamless to the audience and least likely to cause an injury.

Later in the rehearsal, Ware and Maupin debate how to include a reference to “The Red Shoes” in a bit about Martin Scorsese while Bailey Maupin, off to the side, practices her R2-D2 whistle.

Welcome to the absurd world of Le Petomane, where the many-layered jokes take on both physical and intellectual form, and the sensibility is at once smart and slapstick, an incongruity that echoes through every choice the collective makes. The partially deflated kiddie pool on stage, for example, will not be replaced by a more realistic source of water for the show. Rather, the “Magic Baby Pool,” as they have dubbed it, will look shabby but be treated with utter reverence, an altar to the absurd. They rely not on suspension of disbelief, necessarily, but on the embrace of the artificiality of theater as an integral part of the experience. It’s all part of the joke.

“When we get high-concept, as this show could be described, the successful parts are going to be the parts when even the person who doesn’t know what’s going on also thinks it’s funny, not only the person who feels like an insider,” Maupin says.

“But I want the chin-strokers to still be vocal laughers,” Ware adds. “It doesn’t all have to be an intellectual heavy exercise, though it’s cool if you’re getting that, too.”

Le Petomane sells tickets on a sliding affordability scale, but opening night tickets to “5 Things” are only $5 with a recent (within the last month) receipt from Carmichael’s Bookstore, Wild and Woolly Video or ear X-tacy.