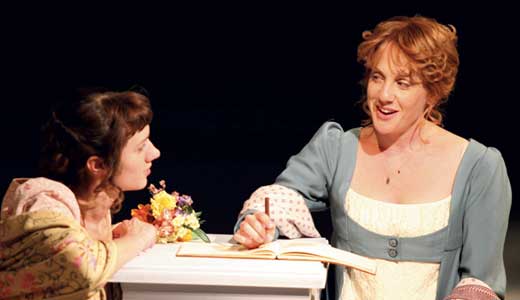 ‘Sense & Sensibility’
Adapted and directed by Jon Jory from Jane Austen’s novel. Continues at Actors Theatre of Louisville through Sept. 24 in the Pamela Brown Auditorium, 516 W. Main St. For tickets or more info, go to www.actorstheatre.org or call 584-1205.

Actors Theatre of Louisville opened its 48th season Thursday with founding artistic director Jon Jory’s adaptation of Jane Austen’s “Sense & Sensibility,” a witty Regency Era romantic comedy about two unmarried sisters and their philosophical tug-of-war between the heart and mind. While not as relentlessly engaging as “Pride and Prejudice” (Jory’s adaptation ran at Actors in 2008), “Sense & Sensibility” is a charmer, and Jory walks the fine line between fidelity to the source and theatrical interpretation with delicate steps.

When the play opens, Mr. Dashwood has died at his Sussex home, Norland Park. The bulk of the estate will go to his son John (Si Osborne), who agrees to look after his three unmarried half-sisters and the current Mrs. Dashwood (a very funny Penny Slusher). John’s greedy wife Fanny (Franette Liebow), however, ensures the girls are left without much extra. Who has money and how much is the subject of much gossip in this society. Regency Era incomes aren’t the most intuitive to contemporary audiences, and I wished for a currency converter so I could put Mrs. Dashwood’s allowance into perspective — how poor are we talking, exactly? Mrs. Dashwood encourages her eldest daughters, pragmatic Elinor (Nancy Lemenager) and passionate Marianne (Helen Sadler), to marry well but also helps them follow their hearts.

The Dashwood girls — minus youngest sister Martha, who is continuously referred to as being off-stage somewhere, in a sort of uneasy bargain with Austen purists who might agree that she is the most expendable member of the Dashwood clan for the sake of streamlining the novel for stage — pack off to live in a remote Devonshire cottage on the grounds of a distant relative (the delightfully bombastic David Pichette). They enjoy the sort of romantic entanglements Austen is known for, attempting to marry for love and for money at the same time. Their wealthy friend Mrs. Jennings (an ebullient Wendy Robie) ensures the girls entrée to both Devonshire and London society so romantic hijinks with partners both suitable and not may ensue.

The acting is strong throughout, with Sadler particularly engaging as Marianne, whose passions are ignited by the rascal Willoughby (Justin Blanchard), while stand-offish Col. Brandon (Alex Podulke) broods over her in the background. Sadler deftly manages that tension between being headstrong and bratty that Austen tends to bestow upon her heroines, ensuring the audience remains on Marianne’s side. Similarly, Lemenager infuses level-headed Elinor with sufficient tender heart, and her own quiet romance with her sister-in-law’s brother Edward (Geoff Rice) rings most true. Diane Mair is appropriately awful as uneducated Lucy Steele, but Jory’s script and direction downplay Lucy’s conniving, so in this production, her social climbing comes off more naïve and pitiful than deceptively shrewd. It’s a pity, because Lucy’s the girl the other girls love to hate.

Thomas Burch’s minimalist set creates an austerely beautiful backdrop for the various drawing rooms and natural settings in which the story moves about. But the sparse set does not show at all how “reduced” the Dashwood girls’ circumstances are when they leave home and move to the country, nor does it provide any visual comparison between the Dashwoods and their more wealthy friends. It’s territory well covered in dialogue, but there’s lost opportunity for visual impact, perhaps more visceral and easier for the audience to grasp.