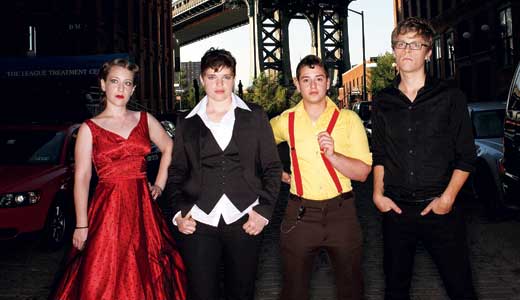 Like most bands today, The Shondes are a queer political Jewish punk band. OK, so maybe they’re pretty unique, but the Brooklyn residents are more than a novelty — they’re a band first, and they write songs about their lives and their interests like everyone else. Currently on tour promoting their third album, Searchlights, the band has also been dealing with violinist Elijah Oberman’s cancer struggle.

LEO: Louisville audiences might know more about punk rock than they do about Judaism. Can you explain the interrelatedness of the two?
Elijah Oberman: Well, there’s certainly a rich history of Jewish punks, but for us, it’s mostly about allowing our music to be the place where all the things that inspire us interact and merge together naturally when we’re creative. So we’re each inspired, in different ways, by aspects of Judaism and also steeped in different kinds of Jewish music, from liturgical to Klezmer. I don’t think I can point to a song or part of a song and say, “That’s Jewish!,” but it’s in there somewhere, and people tell us they can hear it. When you’re making music, all these different parts of you percolate and combine, and that’s really exciting to me.

LEO: What causes more confusion or weirdness on the road — Jewishness, queerness or being from Brooklyn?
EO: (laughs) I think what surprises people most is when we say we’re Jewish in the context of being pro-Palestine activists — yes, there’s lots of us out there. But honestly, I don’t think people are very confused by us. I think people come to see us because they’re excited about who we are and the music we make. It’s usually our music that people are surprised by and talk about, that magical thing that happens when something moves you and you weren’t quite expecting it. That’s the best part of performing.

LEO: How do you feel about the current state of LGBT rules and regulations in the U.S.?
EO: It’s really important to me that there be safety and justice and dignity for queer and trans people in the U.S. and around the world. Rules, regulations and laws can be an important part of that, but it’s not everything. A lot of the organizations I support aren’t doing work on gay marriage or Don’t Ask Don’t Tell, which I know are the queer issues getting the most media and governmental attention right now. They’re working on things like supporting homeless queer youth, stopping police brutality and trans rights in prisons and foster care, and talking about how these issues disproportionately affect queer people of color and poor people. It’s not that I don’t care about gay marriage, but I care about these things more.

LEO: How is your health today?
EO: I’m doing well, thank you. It’s been a really hard year, and I’m cancer-free, but still have a ways to go in terms of recovering from chemo and getting strong again, finding a new balance in my life, and processing what I’ve been through. It’s just the next step in the journey. It’s definitely been a life-changing experience in a lot of really awful ways, but in a lot of really good ways, too. I’m grateful to have been given that opportunity for that learning and also the chance to have a healthy long life, so I can act on what I’ve learned and do something good with it.