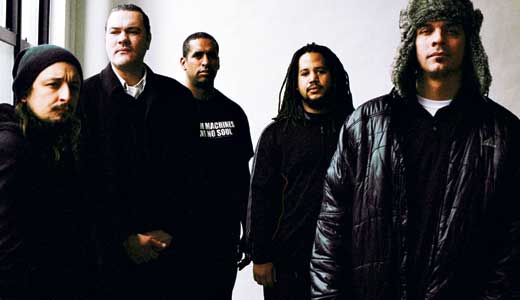 Atmosphere has been at the top of the indie hip-hop pyramid for nearly a decade now, and they don’t appear to be slowing down. Their latest album, Family Sign, marks a new direction for the Minneapolis-based duo of Slug and Ant, with live instrumentation replacing the sample-heavy production of earlier work.

LEO caught up with Slug as he was driving through the mountains of Washington en route to a gig.

LEO: Your catalog stacks up nicely to show the evolution and growth of a man. Is this a natural progression or do you feel an obligation to mature your music as you continue?
Slug: I don’t really feel any sort of obligation with what we do, just to make sure they enjoy what we’re doing. For better or worse, it’s kind of natural, I guess, at least for me. I’ve been fortunate, I’ve only ever had to rap about things that I’m familiar with. I’ve been allowed to be myself, so it would naturally just follow who we are as people.

LEO: Family Sign moves away from the beats and samples aspect into using a live band. Is this the future of the group?
Slug: That’s a good question. I don’t really know. We take these things one at a time. I don’t think either of us has been good at that “Where do you see yourself in five years?” approach. I don’t know what the next step is. It’ll reveal itself as we start working, once the touring is over and we get back home.

LEO: You often write using the perspective of characters other than yourself. In a way, this sets you apart in hip-hop, in that a Jay or Kanye can’t make a song about “average” or “troubled” individuals. Why is that, and why do you get a pass?
Slug: You’ve got to remember, Kanye is not just a rapper — he’s an entity, a tastemaker. In his world, he has to be careful what he wears when he goes out the house. In his world, he’s doing more than just making songs, and so he has more rules to follow than I do. I’m allowed to do certain things because I’m still down here, just barely above the radar. I’m not being judged by anything more than my raps, whereas Kanye and Jay, people judge their whole life if they stop progressing. When they get criticized, they get criticized for their whole shit, not just beats. With me, they’re just criticizing my latest release. I’m not a tastemaker. I don’t change how people wear their tennis shoes, I’ll never change the way people dress. I’m not that dude, I’m not out there like that. But those dudes are a lot bigger than their records.

LEO: I’d argue that (your label) Rhymesayers is as much a brand, perhaps on a different scale —
Slug: Every once in a while I may think about, “Wow, if this all ended tomorrow, what would I do?” I’ve got options. There’s a lot of things that I could do. But if it all ended tomorrow for one of them? They don’t have a whole lot of options. Jay can’t just go back to driving a truck. He’s gotta be Jay-Z for the rest of his life. He’s got to live up to that pressure forever. He’s going to be Jay-Z when he’s 70. It ain’t going to be “formerly Jay-Z.” That’s his life. I could still disappear; I could get a job making, you know, as much money as I make now, not downgrading. If the pressure got to be too much, somebody dissed my latest record and I’m just, “Ah, it’s over, I gotta get out,” it’s not the end of the world. But Jay-Z falls off? That’s a huge fucking fall off.

I mean, with Rhymesayers, it’s still a movement, but if it goes away, we just become part of a longer movie. There will still be kids doing things, and we’ll just be part of that line of movements, from the people that inspired us to “Who can we inspire?”