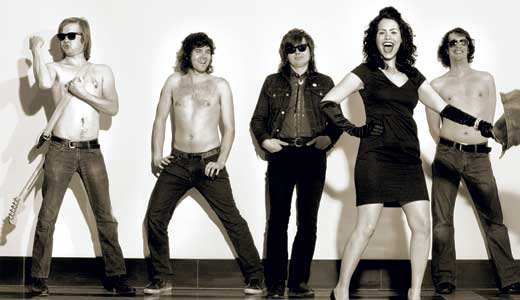 If you’re a fan of The Ladybirds, you should probably thank Brett Holsclaw for their new album, Shimmy Shimmy Dang!

Four years ago, the Louisville band released Whiskey and Wine, a well-received debut that promised plenty of fun times. But the curse of the fallen drummer did not spare them.

“Honestly, dude, we went through so many drummers, we were treading water for so long,” laments Jaxon Lee Swain, the band’s bassist and co-founder with his wife, singer Sarah Teeple, and guitarist Max Balliet.

The trio met several years ago in Bloomington, Ind. “We were good friends with Max’s older sister, so Max would come up to Bloomington and party and play with his band at her house. We found that we had a lot of musical tastes in common and really enjoyed hanging out together,” Teeple says. “When Jaxon and I moved on from Bloomington, we came down here with the idea of starting The Ladybirds with Max, but didn’t know how it was going to pan out. Our original idea was for me to be the singer and have three back-up singers, a la The Shangri-Las, so it was always us three. Then we went through a series of drummers.”

The band took their name from “Ladybird,” a song by the warped duo of Nancy Sinatra and Lee Hazlewood, whose music influenced the band. The cover of Shimmy features a photo of Sinatra, enhanced by local artist Dan Davis.

The band also stayed local when they signed their record deal with Departure Records’ Greg Carter.

“Greg is our neighbor,” Swain says. “We went to a neighborhood block watch meeting —”

“The only neighborhood watch meeting we’ve ever been to —” continues Teeple with a laugh.

“Greg was like, ‘You probably don’t remember me, I’m the guy that comes to your shows,’” continues Swain, “and I’d talked to him before.”

“Our good buddy Scott Mertz had just signed with Departure, so we had him in common,” Teeple says. “We knew each other, he expressed interest …”

And so a partnership was formed.

The Ladybirds’ point of view can be explained simply: “Just having fun,” Teeple says.

JLS: We try to elaborate, like, y’know, ’50s, ’60s rock ‘n’ roll.
ST: You don’t want to say “classic rock,” because that makes us seem like Lynyrd Skynyrd or something. Often we’ll add further elaboration — there’s hints of rockabilly, punk rock …
JLS: Country music.
ST: We started out as punk rockers and … this is what happened (laughs).

Getting to this point “was a long, hard road,” says Swain, as both laugh ruefully.

“We’ve been with Brett for a couple of years now,” Teeple says. “(Keyboardist) Anthony (Fossaluzza) joined us probably about four years ago. His organ playing adds a lot, and that’s kind of shifted our direction a bit, opened us up in a really great way. We all work really well together and have so much fun. But, yeah, it’s been a circuitous route to get here.”

“We almost called the album Circuital,” jokes Swain, whose wife adds vocals to the My Morning Jacket song “Holdin’ On to Black Metal” from that album.

“We counted — I think we had seven or eight drummers, but we had two of them twice,” Teeple laughs. “We’re still on good terms with them.”

JLS: It just didn’t work out.
ST: It’s kind of funny … “Hey, you know that one cliché …?”
JLS: That’s been our lives for the past few years. Now that we’ve got Brett, it’s great. That was a very trying period, and that’s why it took so long … We thought our songs were worth getting out there.
ST: And I think our ability to have a lot of fun together — sometimes, when the stress levels would get up there, we’d still be able to stay up too late and listen to records and drink beer and have a lot of fun together. That always keeps us coming back for more.