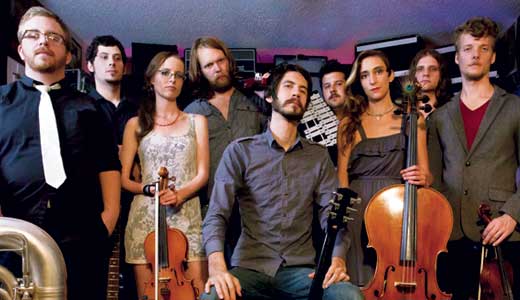 Nashville-based orchestral rock outfit The Ascent of Everest hope one day to become a “psychedelic happening at the orchestra hall”; until then, they’ll settle for the post-rock tag. LEO had a chance to catch up with lead guitarist/vocalist Devin Lamp to see if anyone in the band plans to scale Everest anytime soon, and how Reinhold Messner, the world’s most famous mountaineer, feels about their music. AoE will be joining Louisville heavy-hitters Parlour, who’ll be playing their first hometown show in almost a year.

LEO: What can folks expect from an Ascent of Everest show?
Devin Lamp: We have a lot of people that contribute and play with the band, but for this upcoming tour, we’ll be touring with a seven-piece group featuring cello, viola, piano, guitars, bass, drums and a bunch of percussion toys, handheld instruments and electronics. We use electronics to get a variety of textures — from the stripped-down to symphonically huge. We still want it to be a visually engaging immersive experience for the audience, so we try to keep everyone playing, singing or doing something cool. We manipulate original and found videos live and project them onto the stage in hopes to further juxtapose the cinematic leanings of the music to tell bigger stories.
Once we can afford a bubble machine and some go-go dancers, I could probably just answer this with “It’s a psychedelic happening at the orchestra hall,” but for now, it’s just us trying to break from the “rock-star worship model” and set off fireworks inside the heads of the audience members.

LEO: What are your main musical influences?
DL: A lot of us are classically trained. All of us grew up playing in countless kinds of bands, from psychedelic pop to noise metal, some song-based, some completely experimental. I listen to and compose a lot of electronic music as well as classical music, and I guess this band is a weird melting pot that hopes to reconcile all these genre lines in hopes to create something meaningful. We get labeled a post-rock band a lot, and we don’t try to fight it too hard because, opposed to other genres, it really affords us the opportunity to explore a broad variety of musical interests, techniques and styles.

LEO: Is anyone in your band an avid mountaineer?
DL: (laughs) Well, when I was younger, I hiked a couple peaks, but I don’t know if even then I could consider myself a mountaineer. I must concede the band name is more a metaphor than a declaration for love of getting to high altitudes — though if anyone wants to fund our expedition to Everest, we will certainly rise to the challenge! Seriously, there are so many seemingly unattainable challenges in everyone’s lives that can seem just as daunting as the prospect of scaling Everest — I’d like to think our music is the soundtrack of those journeys. It can be hopeful, terrifying, joyous, even heartbreaking … all at the same time.

LEO: Do you think Reinhold Messner would be into your band?
DL: Judging by the fact he won’t return my emails about us doing original music for the Messner Mountain Museum, I’m guessing no … Maybe we need more yodeling.

LEO: If you could provide the soundtrack for one film, what would it be?
DL: If I could go back in time and steal that gig from the original composer, I’d have to say “Renegade,” which was released under the name “Blueberry” in France. We actually did a show recently where we played along with the film, and it was so perfect. Shot for shot, it’s just one of the prettiest movies that’s come out recently. It’s like a psychedelic Western set in South America; it’s romantic, spiritual, epic and trippy as all get-out, which is what we go for in our music … (it) would have been a good fit.