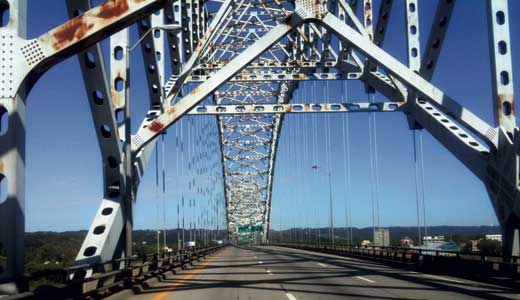 As President Barack Obama stood next to the Ohio River in Cincinnati — with the “functionally obsolete” Brent Spence Bridge carefully framed behind him for the cameras — he began his pitch for the American Jobs Act, a bill that would pump $50 billion into the economy to repair crumbling bridges and other aging infrastructure around the country.

“Sen. Rand Paul is here,” Obama said to a chorus of boos from the partisan crowd that closely resembled a campaign rally.

Obama held out his hand to stop the crowd.

“Rand’s going to be supporting the bridges,” cautioned Obama, a defense he did not bother giving in response to the crowd’s even rougher treatment of House Speaker John Boehner and Sen. Mitch McConnell, the Republican leadership whose states are connected by the bridge and currently serve as the major obstacles to the passage of his jobs bill.

The president’s defense of the junior senator from Kentucky capped off a peculiar journey for the D.C. odd couple — who agree on almost nothing policy-wise — as Paul hitched a ride on Air Force One with him into the Cincinnati-Northern Kentucky Airport last Thursday.

On the flight from D.C., Sen. Paul pitched to the president his own proposal to fix defective bridges around the country, particularly the still-closed Sherman Minton Bridge just down Interstate 71 in Louisville.

The next day, Paul would again advocate for his proposal — the Emergency Transportation Safety Fund Act — in a press conference on the Sherman Minton.

Paul presents his idea as a common sense solution to free up the federal funds needed to repair bridges like the Sherman Minton, a bipartisan fix that even the Democrats flanking him last Thursday and Friday can get behind.

Regardless of whether that turns out to be true, it marks a rather interesting turn for the Kentucky senator, who has spent most of his first year in office advocating for a massive de-funding of the federal department ultimately responsible for financing the task.

Rand Paul made his first big splash as senator when he presented his budget proposal, which slashed an eye-popping $500 billion from the federal government. Among that amount was $42 billion cut from the Department of Transportation — a reduction of almost half of its budget — including $15 billion from the Federal Highway Administration, which is responsible for funding states’ construction on interstates and bridges.

In May, Paul proposed a “gas tax holiday” for four months over the summer — suspending the 18 cents per gallon federal tax on gasoline, which goes into the Highway Trust Fund of the administration. The holiday — which even libertarian economists have called a gimmick — would have cost the fund roughly $12 billion, which Paul proposed filling in by ending all foreign aid.

And on Sept. 15, not even a week after the Sherman Minton was shut down, Paul proposed cutting funds from the department. Facing a Sep. 30 deadline in which the federal government would no longer have authority to collect the gas tax, leaving the Highway Administration with no revenue, the Senate voted on a six-month extension of transportation funding that had unanimously passed the House the day before.

Paul proposed an amendment that limited the Highway Administration to spending only what it takes in from the federal gas tax. In recent years, the tax alone was not enough to meet its budget, as the high cost of gas and increased efficiency of vehicles decreased fuel consumption, necessitating additional funds. Paul’s amendment would have decreased the budget by $9 billion, but was defeated by a 36-61 vote (with McConnell one of the 10 senators voting nay). The full bill passed the Senate easily, with only six senators voting against it, including Paul.

But now, standing on the abandoned Sherman Minton, Paul presented himself as the bipartisan savior of transportation funding, who would make sure that the money was there to repair the bridge.

Paul explained that his bill would transfer the 10 percent of highway funds eligible for “frivolous” projects — such as beautification, bike paths, museums, “turtle tunnels and squirrel sanctuaries” — toward a fund that would be spent only on emergency repairs of vital interstate projects, such as the Sherman Minton or Brent Spence. The secretary of transportation would create a priority list of the most vital projects to determine where those funds go.

But exactly how much money would this free up for the Highway Administration, and would it really be enough to fix troubled bridges?

“I don’t know the exact number, my staff in Washington can probably help you,” Paul told LEO Weekly. “I think it’s close to a billion.” (Paul’s office did not respond to inquiries about the exact number or provide a full list of the projects he deems frivolous. Rep. John Yarmuth told LEO that Paul’s plan made sense “conceptually” but wondered if some of those diverted funds went toward safety features.)

When asked if that $1 billion would all go to the top project, or be spread out among the top five or 10, Paul said he would leave that decision to the federal highway administrator.

“But maybe if the fund would build over time, maybe we could actually build new bridges out of it.”

Given that the American Association of State Highway and Transportation Officials estimated in 2008 that the total cost of fixing all of the nation’s 590,000 bridges in need of repair would cost $140 billion, this might seem like a drop in the bucket. But Paul says that based on what he heard from inspectors when touring the bridge, it might be enough for the Sherman Minton.

“The good news is that what we’re hearing from them downstairs is not in the billions. It’s not replacement, and it might be in the tens of millions,” Paul said. “And I don’t know that, I can’t say that, but some of the initial estimates are not even in the hundreds of millions. So they’re going to find money — money will be found to fix this bridge.”

This might be the case if such a low estimate turns out to be true. But what about all of the other bridges around the country that need repair, or the bridges that need to be built but don’t have the funds?

“Everybody carps ‘Why don’t we have these bridges?’ and no one ever figures out how to get the money for them,” Paul said. “So I think we should set aside part of the gas tax money for replacing and building bridges.

“The question really is, if (the Highway Trust Fund) uses all of the existing money, how do you get money to put in the fund? The fund needs to have a continual means of replenishment, and that’s what my bill would do: Replenish those funds.”

But Paul’s revenue-neutral bill struggles to free up enough money to even repair many bridges around the country, let alone build new ones, like Louisville’s Ohio River Bridges Project. Also, this talk of “building” and “replenishing” the fund seems to contradict Paul’s actions over the past year, during which he’s advocated doing just the opposite.

LEO Weekly asked Sen. Paul why he voted against the six-month extension of transportation funds just a week earlier.

“I had an amendment that said we can only spend what comes in through the highway gas tax,” Paul said. “I think the trust fund should be supported by taxes, and we should spend that amount of money. But I don’t think it’s a good idea to borrow the money for building highways.”

And did he still support putting a hold on that nasty gas tax, which he characterized this May as the federal government’s “profit per gallon,” yet is now the provider of his proposed emergency fund?

“No. I’m for saying we only spend highway funds that come in through the tax.”

How about lowering it? Aren’t we “Taxed Enough Already,” as the Tea Party likes to say?

It’s true — it is barely keeping up. In fact, the U.S. Chamber of Commerce, which flooded Kentucky with television ads to help Rand Paul defeat Jack Conway last year, is now advocating a $1 increase in the gas tax, as a decaying, obsolete infrastructure does American business no good at all.