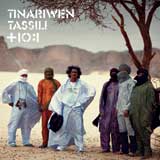 Band forms in the middle of a revolution, singing heartfelt folk songs with electric guitars. The world notices. OK, maybe not the “world” — that’s a pretty damn big place — but every Highlands-type neighborhood in America. That narrows it down a bit, no? Still, it’s a pretty broad fanbase for what is essentially desert gospel music. Tinariwen have released a handful of albums to critical acclaim, beautiful records with jangly guitar rocking the boat just enough for street cred. The band’s latest, Tassili, finds them in an acoustic setting, laying down the amps while reaching across the ocean for some subtle Western additions. Tunde Adebimpe and Kyp Malone of TV on the Radio flew to Algeria to tastefully add vocals and a bit of guitar to a few songs, never stealing the spotlight. Nels Cline is featured on the album’s opener, and the Dirty Dozen Brass Band flavors the album’s best song, “Ya Messinagh.” Tassili might make an excellent change of pace from your usual listening habits — and complement your soy latté, too.