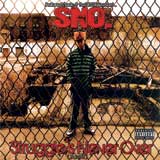 It’s no secret to friends and family that I’m a bit of an Indianaphobe for reasons too numerous to list, but Southern Indiana has certainly made strides to present a burgeoning creative scene over the last couple years. Beyond the excellent releases from the Grimey Rhyme Regime crew, MC SNO. recently dropped Struggle’s Never Over, a mixtape/album that shows a harder edge, but similar quality. The production is decidedly more Southern, heavy on synths and hi-hats, but still samples cleverly (the videogame-sounding “Heavyweight Hustla,” ballad “Loving U”). Nearly half the album has featured vocalists, but none bring down the quality — rare for a crew to be so equal, talent-wise. You may not learn a whole lot from the guests, though SNO. does a good job keeping his own content balanced (call it 65/35) between street and knowledge. This is the result of a steady diet of early ’90s hardcore rap, where dirt may have been done but repercussions for those actions were acknowledged and discussed with equal time.