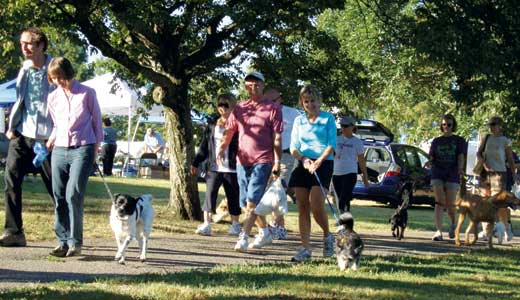 Australians are like us in many ways — they speak English, don’t care much for Mel Gibson any more, and produce musical groups of varying quality. The Necks are a quasi-avant-garde trio (piano, bass and drums) who can’t be neatly shoved into one of your Western imperialist boxes. The Guardian calls them “a post-jazz, post-rock, post-everything sonic experience,” and they’re a lot more likely to play at a museum space like 21c than at Jazzyblu. They’ve made 15 albums, and some call their concerts “religious” and “ecstatic.” The trio only first came over to the States two years ago, so our Big Gulp-slurping, SUV-driving ways might even still be cute to them. Louisville’s finest all-female a capella trio, the Sandpaper Dolls, joins them in what is, for them, too, the most suitable venue in town for their unique magic. —Peter Berkowitz

Don’t get me wrong, I love a good student Shakespeare production. But for my money, it’s always exciting to see the students at Walden Theatre — Louisville’s own rigorous training ground for young actors — tackle contemporary plays. Originally commissioned by the Children’s Theatre Company of Minneapolis, “Anon(ymous)” — playwright Naomi Iizuka’s re-imagining of Homer’s epic “The Odyssey” — follows a young refugee separated from his mother and plagued by memories of homeland violence across the fractured landscape of contemporary America — sex, violence and consumerism included — encountering characters both benevolent and dangerous along the way. Many of Iizuka’s plays have enjoyed world premieres in Actors Theatre’s Humana Festival, most recently 2007’s “Strike-Slip,” so here’s another chance for fans to see her work on a Louisville stage, featuring some of the area’s most promising young talent. —Erin Keane

On Greenhaus’ Yelp page, Matt R. nailed the secret to the store’s success — “Greenhaus has tapped into a base truth about me: I like to sit on nice vintage furniture and drink quality beer.” Couldn’t have said it better myself. The Germantown liquor/plant/vintage furniture store is adding another adjective to its namesake — chocolate — by partnering with Cellar Door Chocolates, which will open a mini-store inside Greenhaus. The two businesses are celebrating this most holy of unions Friday with an art show and wine and chocolate tasting. Yum. Artists include Mickie Winters, Logan Reulet and Harriet Bowling. Winters prefers photography, Reulet did the artwork for Nerves Junior’s latest album, and Bowling discovered art after a career in nursing and dabbles in everything from still life to landscapes. You can’t go wrong with a little art, wine and chocolate on a Friday night. —Sara Havens

For all his glue sniffing and searching for something to do, Cory could just as easily be the hero of a Ramones song as protagonist of Kevin Chenault’s “Young Islands.” The Evansville, Ind., filmmaker, co-star Joseph Dodd and Steven Hamilton (the actor who plays Cory) will be in town for a post-screening discussion of their handmade take on Midwest mumblecore. The film follows Cory, a complex meanderer who’s recently returned home from summer camp, where he’s forced to process his parents’ divorce, father’s heart attack and budding attraction toward best friend Kenny. All this is set to a cool, indie soundtrack, provided by the film’s distributor, the music label Gulcher Records. Founded in the ‘70s, this Bloomington, Ind., outfit has released material from such heartland notables as Kurt Vile and Rock and Roll Hall of Famer John Cougar Mellencamp. —J. Christian Walsh

When local filmmaker Coury Deeb talks about “Grace Surpasses,” within a few breaths he’s gone from Sudan to Sundance. The 55-minute film about a Sudanese family was shot on location last fall and explores the day-to-day struggles of living in a war-torn country where violence is constant and drinking water is hours away. Deeb will enter “Grace Surpasses” into film festivals soon but first wanted a hometown viewing. Actually, the word “viewing” doesn’t give this event justice. Louisville’s own Interstates will play the score live, accompanied by a Sudanese choir. And with only three words of dialogue in the whole film, the music and imagery, both beautiful and haunting, will make this night memorable. Money from the screening will help fund Nadus Films, Deeb’s nonprofit focused on social-justice films. —Anne Marshall

Louisville Is for Lovers

For Whistle Peak’s first live performance since the 2010 Forecastle Festival 14 months ago, they’ve chosen to close out the Louisville Is for Lovers’ summer series on the roof at Glassworks. It’s among the best venues for enjoying live music in the region — easily the tallest — and a happenin’ singles’ scene, too, if you’ve been looking for hipster indie love in all the wrong places. If you’re in your 30s and tired of the bar scene, here’s a chance to drink, chillax and get your swerve on without feeling too out of it. Lovers’ founder John King’s group, the rarely seen Gallery Singers, and good folker The Mack round out a thick bill of locally sourced musical goodness. Whistle Peak will surely be seen again soon, as their next album will be released in the coming months through local label Karate Body Records. —

Athos, Porthos and Aramis — oh my! These “Three Musketeers” have been a part of my life since I first read the book by Alexandre Dumas as a kid. As 17th-century French Musketeers of the Guard, they were members of the elite fighting force of their day. Throw in young d’Artagnan, who aspires to be a Musketeer, and it quickly becomes great swashbuckling fun. We’ll be saying “All for one, one for all” after it’s over. The Louisville Ballet is presenting André Prokovsky’s dance version of the story, with music by Giuseppe Verdi. As far as ballets go, this is a relatively new one; the Australian Ballet first danced “The Three Musketeers” in 1980. The Louisville Ballet is only the 12th company to perform it, the last time in 2005. —Jo Anne Triplett

Bark in the Park

OK Louisvillians, put down your latest issue of Dog Fancy and hightail it to Seneca Park on Saturday. Bark in the Park (just imagine cats romping in the park — it’s funny) is back and kicks off with a 2-mile walk at 9 a.m. Perhaps that brisk jaunt has your leashed loved one in need of a velour sweat suit to cool down in? No problem. Vendors open at 9:30. Some of the day’s highlights include a “kissing contest” at 10:30, Halloween costume competition at 12:30, and one lucky pooch will win “Dog of the Year” at 2:30. Just like politicians, money earns the victory. The public votes for their favorite dog with a dollar or two. But no worries, this event raises funds for a good cause. The Animal Care Society is a small, no-kill shelter that’s been around for more than 20 years. —Anne Marshall

Indulge your “Jurassic Park” fantasy this weekend at the 17th annual Falls Fossil Festival. This two-day event features speakers, workshops and fossil identification, with the Indiana Society for Paleontology, the Kentucky Paleontological Society and the KYANA Geological Society on hand to tell you more than you ever wanted to know about your mystery rocks. You can pick up anything from fossils to jewelry from one of the participating vendors, or, if you’re looking to get your hands a little dirty, hike the Falls fossil beds and dig your own fossils and minerals in one of the specially designated rock piles. Representatives from geological sites across the country will be on hand to discuss their fossil parks, while the kids stay busy making their own gem trees and pet rocks. Best of all, the proceeds go to benefit the Falls of the Ohio educational programs. —Jennifer Harlan

If you consider yourself a Louisville history buff, or at least would like to get in on that action, then the Riverside, Farnsley-Moremen Landing is the place to step back in time this weekend. There will be historical re-enactors in period clothing representing Louisville’s history from 1765 through 1865, with craft demonstrations, a women’s archery contest (complete with very fancy hats), period music, weapons demonstrations and military parades. You can even meet President Abraham Lincoln and Frederick Douglass, so you’re assured to be spared of any Confederacy worship. Plus, you know you’ve been waiting for just the right occasion to wear your new hoop skirt in public. There are plenty of activities and games for children, so consider this an opportunity to rip them away from the television and give them some old-timey Louisville pride. —Joe Sonka

Straight outta Zimbabwe, mbira player Patience Chaitezvi is making a very special mini-tour of Louisville this week. On Sunday night, she’ll play a concert at Bellarmine, where she’ll return on Monday evening for a lecture. On Tuesday, she’ll be at IUS for a small performance class. What’s a mbira? It’s a plucked thumb piano that makes a delightful yet haunting sound; fans of Konono No1 might be familiar with it, though it is rare in American music today. A high school teacher, Chaitezvi is experienced in teaching history and culture, so who better to teach us about this wonderful instrument? She has also earned a bachelor’s degree in divinity, with a specialty in comparative religion, so she is well-versed in articulating differences between Christian and Shona traditions. Female mbira players are about as hard to find as musicians with higher education, so don’t miss this rare opportunity for some fun edification. —Peter Berkowitz

Some artists like their brush strokes to show, some do not. Then there’s the group that is so much about the visible strokes that they use a palette knife, producing texture with a capital T. Pam Folsom is in the latter camp. Her landscapes are colorful abstracts made that much more intriguing by the apparent use of the palette knife. Folsom even titled one of the works in the exhibition “Texture.” She says she strives for “placement, interpretation and swirls of visible knife strokes climbing through the composition, scraping, blending and making the edges of vibrant colors mesh, beyond reality but believable.” The process by which an artwork is made is usually hidden from us, the viewer. Not this time. —Jo Anne Triplett