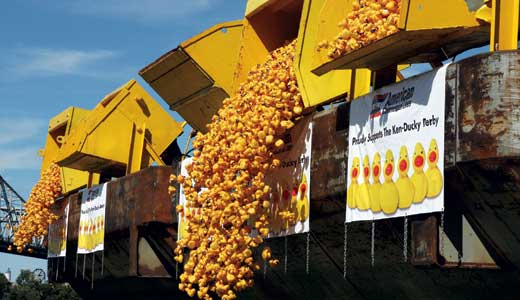 Film is the second most expensive art form there is, just behind architecture. It certainly has a trickle-down effect, as this exhibition at O.Z. Gallery attests. “Art begets art,” according to Bobby Barbour and Sarah Katherine Davis, two participants in the show. “As one of the most accessible and mass-consumed forms of art, film is no different. Films can entertain and evoke nostalgia, even for times we never lived or experiences we never had. They give a glimpse from another perspective, provide escape or can affect us in a much deeper sense.” The gallery, founded by U of L glass students, now shows all media, by both students and alumni. It will also be open during the Sept. 30 FAT Friday Trolley Hop. —Jo Anne Triplett

Calling all visual artists, filmmakers and musicians: There’s a new syndicate in town — without the sinister undertones usually associated with the word. The Louisville Artists Syndicate plans to gather creative types at events that will occur on the third Thursday of each month. Their first soiree features visual art, short films and music by She Might Bite, Bu Hao Ting and the Charlie Rivera Trio. “We want everyone to join and be a part of this,” says artist Andrew Cozzens. “However, a big goal for the group is to get the younger artists involved, because they are underrepresented in the Louisville art scene. We want it to be a group where all artists of all ages can come together … and bring some fresh ideas to the table.” —Jo Anne Triplett

What the funk? You’ve heard the songs from “The Sound of Music” all your life — you know them like you know your own name, or your favorite comic book. Well, hold on to your butts, because on Thursday, Brooklyn Rundfunk Orkestrata will perform “The Hills Are Alive” at the Bomhard — and somewhere Julie Andrews just pooped herself. “The Hills Are Alive” features 14 songs from the classic Rodgers and Hammerstein musical, performed by multiple entertainers with a blend of rock, jazz, hip-hop, R&B and country. (We can only hope they’ve turned “Do-Re-Mi” into a rap.) The Orkestrata is the brainchild of Peter Kiesewalter, the man behind Grammy-nominated opera revisionists East Village Opera Company, so it’s all legit. Personally, I can’t wait until BRO re-writes “Oklahoma!” as a Gregorian chant. —Kevin Gibson

The Wandas first came together at Boston’s Berklee College of Music. Maybe they were majoring in music history, because the quartet’s sound is peculiarly retro. But you’ll never feel hit over the head with a “let’s all leave this place because the real show was back in the ‘70s” vibe. Instead, they’ve updated some classic sounds with humility, humor and an energy that’s generous but not gratuitous. The songs and arrangements are a little Beatlesque, and they can seem like a Badfinger that’s not so desperate to impress. They might also remind you of Supertramp, who could make complex songs out of simple elements while balancing moods between the sad and the sardonic. Their new self-titled full-length trades in some subtle self-deprecating humor, yet they have a reputation as a rollicking live act. Tristen Brooke is also on the bill. —T.E. Lyons

Since 1990, Kentucky Refugee Ministries has orchestrated the resettlement of 8,000 refugees fleeing persecution from all corners of the world. They’re both welcoming committee and longtime friend for new lives being built in Louisville. KRM covers immediate shelter and food concerns while also offering English and job-skills classes, along with immigration legal services. On Friday, you can support KRM as well as indulge in Louisville’s finest food and drink — not a bad combo. Ramsi’s Café on the World and Brown-Forman are among those catering Global Gourmet at Creation Gardens. Appalatin, with their unique blend of folk and Latin American music, will be among the musicians performing. Adding to the multi-ethnic celebration, many of the talented artists whom KRM has helped resettle will display their works. —Anne Marshall

A Latin dance party under the stars with tapas and tequila to boot? Sounds like the perfect way to spend an early fall night on the town. Granted, I don’t know how to do the merengue and I’ve steered clear of tequila for years, but no worries — there are plenty of other reasons to check out the seventh annual Adelante Latin Rooftop Dance Party at Glassworks. The eight-piece Latin powerhouse Cosa Seria will energize the crowd with its Salsa fusion, and Jarfi’s Bistro will provide an array of tasty tapas with an international flair. Oh, and about the booze: The Tequila Factory will provide flights of its namesake beverage, and there’s a cash bar for the tequila-averse like myself. Proceeds will benefit Adelante Hispanic Achievers, a nonprofit dedicated to helping Louisville’s Hispanic youth succeed in school and beyond. —Sarah Kelley

It’s always a treat when singer-songwriter Jenny Owen Youngs stops in town, and it’s been a while since her last visit in 2009. Back then she was promoting Transmitter Failure, her second full-length. Now she’s working on a new album and is hitting the road to test out a few tracks. I caught up with her on email, more as a fan than a journalist. She says her fans have stepped up to help fund this new album through Kickstarter. “I was totally floored when people backed the project by around $38,000. Musically it’s a bit more rocking, a bit grittier.” I told her how much her song “Fuck Was I” helped me through a recent breakup. “It’s definitely a fan favorite and a song by which people seem to feel genuinely helped-through things,” she says. “For me, that’s just mind-blowing. So thank you, and I’m glad it helped.” —Sara Havens

The Harbor House of Louisville is holding their eighth annual rubber ducky race down the Ohio River, with proceeds going toward their work providing high quality care for adults with developmental and physical disabilities. You can buy your own duck to enter the race for $5 at any Kroger, Starbucks, Republic Bank, Krispy Kreme or Papa John’s store, or online at www.hhlou.org. Second and third place duckies win $2,000 and $1,000, respectively, with the owner of the first place lucky ducky receiving a new Honda Fit from Sam Swope Honda World. There will also be plenty of food, activities for kids and music from the Louisville School of Rock and The Jaywalkers. There are an estimated 30,000 adults in Louisville in need of the services provided by the Harbor House, so even if your duck is not lucky, it’s worth an afternoon of duck racing at the waterfront. —Joe Sonka

Even a designer neighborhood needs an annual block party. NuLu, the contemporary art gallery district around East Market Street, has grown to include a bustling upscale dining and shopping district over the last couple of years, and the recent addition of Dreamland Film Center suggests a thriving entertainment component might not be far behind. The third annual free and family-friendly NuLu Festival celebrates the revitalization of this once-struggling corner of Louisville with performances by local musicians, including The Pass and Peter Searcy, along with local food, drink and treats by neighbors like The Bodega, Cake Flour and East Market candy mainstays Muth’s. NuLu Fest is also the official after-party of the annual IdeaFestival, so you can come talk up your big ideas over a craft brew from the Louisville Beer Store or a tasty treat from Please & Thank You. —Erin Keane

Poets in more than 450 cities worldwide have organized “100 Thousand Poets for Change,” which will mark the largest poetry reading in history. The idea is to promote environmental, social and political change through poetry. All the events are scheduled to take place simultaneously in more than 95 countries (including a peace gathering in Jalalabad, Afghanistan). Louisville is included in the mix on Saturday, at La Casita in Old Louisville. Local poets include Aletha Fields, Divinity Rose, Katerina Stoykova-Klemer, Mark James, Kate Welsh and Sonja de Vries. They’ll join musicians/bands Shadwick Wilde, Huh Robots, Appalatin and Hal Dolls. Best of all, it doesn’t cost a dime to be a part of this history-making event. —Sara Havens

Maz Jobrani is soaring high, nesting at the top of the competitive world of Middle Eastern comedians. Which is no laughing matter … no wait, it’s OK to laugh, otherwise the terrorists win. Jobrani is a member of “The Axis of Evil” … no, wait, let me finish … he’s a member of “The Axis of Evil Comedy Tour,” which was a special that aired on Comedy Central in 2007; later, he shot a solo special for Showtime called “Brown and Friendly.” Raised in San Francisco and a graduate of Berkley, Jobrani has appeared on film and TV, from “Friday After Next” and “The Interpreter” to “The West Wing” and “24.” He brings his stand-up to the Bomhard Theater on Saturday as part of the IdeaFestival. —Brent Owen

‘A Country Selichot for Meghan’s Mountain’

Here’s a setup for what could be a really bad joke: What do you get when you put cancer, country music and Judaism together? The good news is that this is not a joke — it’s an inventive way to re-engage people who might be fatigued by the same old charitable events. Congregation Adath Jeshurun, a conservative synagogue in the Highlands, hosts this unique benefit for Meghan’s Mountain, a Prospect-based nonprofit that aims to directly benefit cancer patients and their families. Meghan Steinberg, the founder of Meghan’s Mountain, will speak. The evening is hosted by Wayne Perkey of “Perkey’s People” and will feature music by Mickey Clark & the Blue Norther. The entertainment will be recorded for WFPK’s “Kentucky Homefront.” The night is open to the public and, like all Jewish-hosted events, there will be a dessert reception (aka “The Afterparty”). —Peter Berkowitz

Knock out your performance and you’ll get a return invitation. The same rules apply to dating as well as concerts. Mayer Hawthorne curled the toes last year of an appreciative audience and is getting that late-night “What are you doing?” phone call from Zanzabar on Saturday. His new album, the first for Universal Republic, promises more of the retro-soul of his Stones Throw debut, if the singles so far show a bit more of a Daryl Hall bend to his vocals. (Note that I didn’t say that was a bad thing). His backing band, The County, is worth the price of admission alone, a Daptone-worthy crew of nu-funksters with a guitarist unafraid of getting his piece in. His label even released the instrumentals to A Strange Arrangement and gets as much play in these headphones as the vocal version. Expect this one to sell out, as last year’s show was packed, and the hype machine will be in full effect for the new disc by show time. —Damien McPherson