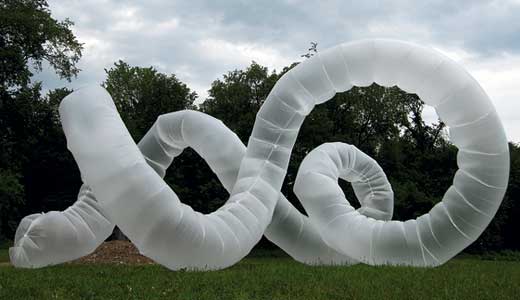 Do you wish the Black Keys had a female frontperson? Well, worry no more! The Ghost Wolves, from Austin, Texas, are coming to your Rudyard Kipling listening-room on Thursday to show you what the White Stripes might have looked like if Meg had been the leader (and more conventionally musically talented). Lead singer and guitarist Carley Wolf and drummer Jonathan Konya are touring to promote their new six-song EP, In Ya Neck, so even if you’ve got the cramps and are thinking about joining the gun club, drop those plans, you dirt-bomb, and aim your Vespa for Old Louisville. The Austin American-Statesman calls their show “… a bit of a spectacle, with Wolf, dressed all in white with a matching Warhol-esque wig, jumping around the stage.” Busted Soles opens. —Peter Berkowitz

During a brief second residency in Louisville in 1997, the dance-record buyer at ear X-tacy told me about a crew of guys who were holding monthly parties with freestyle battles, b-boys and girls, and some of the better graffiti artists all in one building. Being relatively new to the area and a hermit at the time, this was too good to pass up. The parties were put on by a collective named the 502 Headz, founded by Element One Wise (Mike Kabel), while based at Fort Knox. These parties hosted first local appearances by a who’s-who of indie hip-hop’s past and present: Royce da 5’9”, Masta Ace, Blueprint, C-Rayz Walz, Mr. Dibbs and Grandmaster Caz. The shows dried up around 2004, and Louisville hip-hop was never the same. Fitting, then, that as Louisville is experiencing its great rap renaissance of 2011 that the 502 Headz are coming back together for one night only. —Damien McPherson

People travel up career ladders, hoping to reach the top rung well versed in skill and satisfaction. (Artists are no different, except maybe the ladders zigzag more than most.) As time goes on, many want to turn around and help those on the lower rungs. Ceramicist Melvin Rowe has offered a hand to up-and-comers by creating the Pottery Rowe Purchase Award in ceramics, given out at the Kentucky State Fair. The first year’s winner is Patrick Rademaker. To introduce the U of L senior to the art viewing public, Rowe is hosting a two-day exhibit of Rademaker’s ceramics at his Clifton studio/showroom, Pottery Rowe. The opening is during the Sept. 30 FAT Friday from 6-9 p.m.; the show will continue on Saturday, Oct. 1, from 10 a.m.-5 p.m. —Jo Anne Triplett

It’s the first weekend in October, which means it’s time for the St. James Court Art Show knock-off, the UnFair. Since LEO readers just voted the event third best art fair, I probably shouldn’t bore you with details like how it’s not officially affiliated with St. James, or that it was established over a decade ago to counter the droves of out-of-towners willing and able to pay high booth-fees, or that it’s a (nearly) free DIY renegade version for local artists only. At this point, most of the affiliated artists are UnFair veterans. It’s a close-knit, snarky bunch, braving whatever weird weather Louisville throws their way in the hopes of catching the eye of fringe art buyers while shocking a few gawkers there to buy yard art. So what’s new this year? Along with the standard crew, I hear there are two new artists participating, and … wait for it … they paved the backyard at the Mag Bar. —Britany Baker

Louisville will host one of the biggest hacker/security conferences in the country this weekend, with a stacked line-up of top national experts in the field of information security. One of those speakers will be Kevin Mitnick, a former super-hacker who was the most wanted computer criminal in the country before the FBI arrested him in 1995. He’s now a folk hero to computer geeks around the world. Much of the conference will be dedicated to presentations and training on how to protect yourself (company, government or otherwise) from the Mitnicks of the cyberworld, as the conference delves into the newest hacking techniques and the best defenses against them. Tickets for the event are $150 per day in advance, and $175 at the door, with an optional, two-day training cost of $825. If you’re into hacking or computer security, or just a Mitnick groupie, this is a conference you can’t afford to miss (assuming you can afford it). —Joe Sonka

U of L Pride Week

Films and speakers dominate the schedule at University of Louisville’s Pride Week, which kicks off on Friday with a dance at the Red Barn (8 p.m.). Highlights include a keynote address by Anthony Rapp, who originated the role of Mark in “Rent” on Broadway and also starred in the film adaptation in 2005. He’ll lead an acting workshop on Oct. 6 before his lecture at the Student Activities Center (7 p.m.). There will also be screenings of “Switch: A Community in Transition,” which explores the impact of gender transition on families, friends and co-workers (Oct. 2, 6 p.m.), and “For the Bible Tells Me So,” which examines how the religious right interprets the Bible to support their agenda (Oct. 4, 6:30 p.m.). Lectures, discussions and open mics fill out the rest of the seven days. Check out the website for more. —Sara Havens

Kaviar Forge & Gallery presents “Chinese Turkestan,” a collection of photography by Ryan Pyle, which reveals a dying Chinese culture in the area known as Turkestan. The people of this region remain as they have for generations as herdsmen, farmers, craftsmen and shop owners who buy and sell animals and fuel at trading posts, go to mosque regularly and watch cockfighting competitions. Pyle, who has lived in China since 2002 and is a regular contributor to The New York Times, says he created the collection of images to capture this culture before its slow but sure absorption into the culture of the Xinjiang Province. The exhibit is part of Louisville’s Photo Biennial and continues through Oct. 29. —Kevin Gibson

“I need more Vaudeville in my life.” If you’re like me, then that thought has crossed your mind more regularly than you’d care to admit. Smerlin Entertainment has heard your innermost thoughts: They’re bringing it back to The Bard’s Town on Sunday. “The Conjuring and Comedy Cabaret” is a new monthly show that’s set to launch this week. It’ll play host to a myriad of different acts from all over the region. Hosted by local funnyman Mike Nilson, each show will be completely different. This flagship performance will feature appearances from the Va Va Vixens; Taylor Martin’s alter ego Andrea Martin from Indianapolis; and the founder of Lexington’s Magic Dinner Theater, John Shore. So come down and conjure up a good time. —Brent Owen

The Ogle Center at IUS

Yes, it’s a show about jazz, but don’t look over there at that escort ad! This is about Miles Davis — you like Miles Davis. Or at least you tell people you do to try to sound all cultured and shit. You did buy that CD of Kind of Blue, didn’t you? Well, either way, this “Experience” is meant to be somewhat accessible to an audience that might not spend a lot of time reading DownBeat. It focuses on what some call his best period, between the landmark recordings that birthed Birth of the Cool and 1959’s stuff-people-like classic Kind of Blue. Davis’ parts will be played by Ambrose Akinmusire, a rising talent on the trumpet. His band will provide support on tenor sax, piano, bass and drums, and narrator Donald Lacy will keep the story moving with readings from poets and authors of the era. Cool? —Peter Berkowitz

‘Note to Self’ by Rodney Hatfield

Gallery owners must dance for joy when they represent an artist whose work consistently sells. On that note, Chuck Swanson has to be ecstatic for his show with Rodney Hatfield, aka the Art Snake. Swanson has been exhibiting Hatfield’s work every two years since 1989. “Rodney has an endless enthusiasm for his work, and he’s always changing, growing, working hard,” he says. “Plus he’s a pro and he’s funny, meaning easy to work with. We could really show him once a year, but I like to keep the public a bit more hungry.” So, for the 12th time, Hatfield’s art is on display in Swanson’s gallery. This exhibit features more than 90 small paintings, at least 12 large ones, and a few driftwood sculptures. No need to wait till 2013. —Jo Anne Triplett

Last week, two very different exhibitions opened up at the Land of Tomorrow Gallery, but both use familiar items in compelling ways. In “Luminosity,” Shih Chieh Huang’s larger-than-life sculptures catch the eye with colored lights and biomorphic movements that gently fade into one another, giving the illusion of walking through coral reef, or some other colorful, dreamy place. Look closer, though, and the materials are mundane and controlled by electricity — signifying the contrast between the infinite human imagination and commonplace objects. Mickey Smith’s “Tell You What” examines books — specifically, those old, pleasant-smelling academic tomes that can be found slumped on university library shelves and in the homes of grandparents or studious hipsters. Smith’s photographs and installations comment on the changing role of these massive volumes. —Jane Mattingly

Louisville is a city that likes to feel a little freaked out. We hold our annual parade of walking dead and our apocryphal goat-men close; we fright-night and ghost-run like it’s our job. So it’s only fitting that Actors Theatre would bring us “Dracula” every fall when the leaves burn orange and the shadows begin slowly to lengthen. Over the years, veteran actor and director Bill McNulty has tweaked the horror classic into a truly original production — fast-paced enough to keep the blood pumping but as suspenseful as any contemporary slasher flick. In this production, Dracula’s not your “True Blood” boyfriend; he’s a monster set loose on an unsuspecting waterfront town. Hey, some things are timeless — velvet capes, swooning virgins and a slavering, blood-sucking demon straight out of your worst nightmares. Unwrap your garlic candies before curtain, please. —Erin Keane