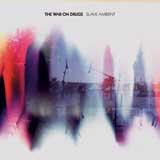 Philadelphia’s The War On Drugs successfully interfuse two warm but seemingly contrary musical realms: Americana rock and rosy ambient arrangements. No other album this year will recall all the same references, including the howl of Born In the U.S.A.-era Springsteen, the stoned ease of Petty, and the effulgent multi-personalities of Brian Eno. In fact, many of the more upbeat tracks, including “Your Love is Calling My Name” and “Come to the City,” evoke what it might sound like if Bob Dylan were backed by Cryptograms-era Deerhunter. Associations aside, Slave Ambient contains such incessant warmth and assured style that it is difficult to believe the band experienced significant difficulties finishing the record and also lost a key contributor (Kurt Vile) to a lauded solo career after releasing their wonderful 2008 debut, Wagonwheel Blues. Simply put, Slave Ambient is mighty and bold and hopeful. It isn’t likely to go gold or lead to a national headlining tour of theaters, but it will certainly find the ear of many who will quietly campaign for its appreciation. It deserves that much.