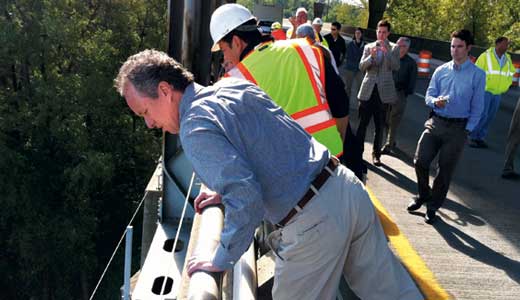 A handful of reporters mill about the eerily abandoned top level of the double-decker Sherman Minton Bridge, which until recently would have been full of cars and trucks crossing the Ohio River.

But on this Saturday morning, the bridge serves as a ghostly exhibit A in the case of America’s aging infrastructure.

On the lower level, transportation officials lead Republican Sen. Mitch McConnell and Democratic Rep. John Yarmuth, of Kentucky, Rep. Todd Young, an Indiana Republican, and Louisville Mayor Greg Fischer on a tour of the bridge’s cracked support beams, which have led to snarled traffic and frustrated motorists on both sides of the river since its shutdown on Sep. 8.

They all emphasize to the media that it would be premature to diagnose the bridge, as the full conclusion will not be reached for another two weeks — whether that be two months or two years of repairs, or a new bridge altogether.

But accompanying the fate of the bridge is speculation over whether the money will be there to fix it. If the repair needs are minor, the funding might not prove difficult. However, if the necessary repairs are extensive, or if a new bridge is required, the region — which knows the obstacles to building bridges all too well — will face a challenging political environment in which it must secure an extraordinary amount of money in very little time.

The day before “Shermageddon,” President Obama addressed a joint session of Congress, laying out the American Jobs Act, which presciently devotes $50 billion to repair America’s crumbling infrastructure. He singled out the “functionally obsolete” Brent Spence Bridge in Northern Kentucky, using it as an example of the roughly 162,000 deficient bridges in the country.

Just days after the Sherman Minton Bridge emerged as a much better example, McConnell spoke from the Senate floor, panning Obama’s jobs bill as a “political exercise” and his own “re-election plan.” That night, Yarmuth went on “The Rachel Maddow Show,” firing back that McConnell should return to Louisville and talk to his constituents affected by the closure, saying he “needs to take a leadership role in the Senate to help get this kind of investment adopted by the Congress.”

As the two legislators stood together on the bridge Saturday morning, McConnell took a notably different tone on the American Jobs Act, saying, “I don’t rule all of it out, nor all of it in,” and that, “All of us are going to be working together on a bipartisan basis — state, local and federal — to get this problem solved as rapidly as we can.”

McConnell also noted that the Senate passed a five-month extension of a highway spending bill that Thursday, which only six senators voted against — including Kentucky Republican Rand Paul, who was a no-show at the bridge and did not respond to inquiries regarding his vote or his absence.

Yarmuth tells LEO Weekly he is working with Rep. Young on a rider for a supplemental appropriations bill, which would allow the repair of the Sherman Minton to tap into $140 million of emergency disaster funds, as current rules only allow it to go toward already collapsed bridges.

Even though some of those funds might be available for Kentucky and Indiana to repair the Sherman Minton, Yarmuth warns that there are many other competing projects around the country, and that the chairman of the House Committee on Transportation and Infrastructure has proposed a 23 percent cut in transportation funding.

If the cost to repair Sherman Minton is on the high end, Yarmuth says this money would likely not be enough. In contrast, he says the American Jobs Act would provide necessary funds for the Sherman Minton and other vital projects, including the Ohio River Bridges Project. The mayor’s office indicates Fischer supports the Jobs Act. In a vague statement provided to LEO Weekly, Beshear both criticized Washington and asked for infrastructure funding, neglecting to say whether he supports the bill.

“The infrastructure bank ($10 billion), which the president has proposed, is specifically designed to fund major projects,” Yarmuth says. “That’s another possible source of funding for the new bridges. Or, for replacing the Sherman Minton, if that becomes necessary.”

However, passage of such a bill remains uncertain, and its fate likely rests with McConnell.

Once upon a time, Sen. McConnell bragged about the amount of pork he brought home to Kentucky for construction projects — it was the main theme of his re-election campaign in 2008.

But the political climate has changed since then. The Tea Party wave swept into D.C. last year, along with a ban on earmarks and an aversion to federal spending. McConnell is not only wary of this challenge to his right, but has repeatedly stated that defeating President Obama is his “No. 1 goal.”

Yarmuth says this environment strains Kentucky’s ability to bring in federal dollars. “The ban on earmarks makes this much more difficult. Because (McConnell) would obviously have an easier time getting an earmark of this magnitude through than I would in the House.”

Even though recent polls show widespread support for increased infrastructure spending, Yarmuth is pessimistic that the American Jobs Act will pass through Congress as it stands. Yet he hopes the infrastructure portion of the bill might pass separately, giving it a 50/50 chance.

But Yarmuth notes that this likely depends on McConnell’s stance.

“This is not one of Mitch’s big fights, to cut infrastructure spending,” Yarmuth says. “I don’t think this is the fight he wants to make, or drag a lot of his members into.

“So I give him the benefit of the doubt when he says he’ll seriously consider construction spending. But the proof will be in the votes."