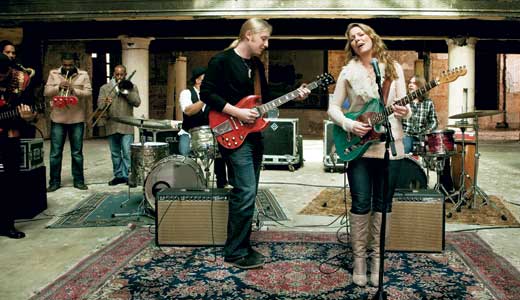 The Tedeschi Trucks Band began last year so that blues singer/guitarist Susan Tedeschi and her husband, Allman Brothers Band guitarist Derek Trucks, could spend more time together. Their merged band comes to Louisville for a special event on Saturday. LEO called Trucks at a hotel in Wisconsin last week.

LEO: You’re coming to Louisville for a benefit for cystic fibrosis. What is the band’s personal connection to that?
Derek Trucks: We try to do at least a handful of dates a year connected to either charities we’re familiar with or just situations where we feel like we’re giving back in some way. We got contacted about that show; it’s not a situation I was familiar with before, but it seemed like a good setup.

LEO: Do you ever feel guilty about being able to make money off of playing music?
DT: No. We work our asses off (laughs), and we aren’t making that much money! I’d feel more guilty if I was working in an office and trading numbers and making untold millions. When you show up and play music for people, it’s a positive experience for everybody. It’s not a zero-sum game where if we win, you lose (laughs). It’s one of the few things in life I think everybody can walk away from feeling better about.

LEO: Between your family, this band and your other bands, you’re one of the most family-oriented musicians I can think of.
DT: We try to keep it that way. A lot of that is circumstance, and a lot of it you have to nurture, too. We make sure that the people we’re on the road with are people you wanna … (laughs) … spend a huge part of your life with. With your family, you don’t choose who your family is, but you can choose how you deal with everybody. We’re pretty fortunate that way.

LEO: Do you feel you’ve learned from examples that you’ve seen around you, and in rock ’n’ roll and soul history, as far as seeing problems you can avoid?
DT: Oh, yeah. You learn a lot more about what not to do from the hundreds of thousands of stories out there. There’s a lot of career success stories, but not a lot of life success stories. Being around a lot of those people, playing in bands with some of those people, you get a real first-hand account of what went down, what works and what doesn’t. A lot of times, you have to go with instinct and buck trends, which we seem to do a lot. The conventional wisdom of “Don’t start a band with your wife,” or “During a recession, don’t put an 11-piece band together” (laughs) — these are all things people would say, “Not the best idea.” But it’s been great, man. It’s more than worth it.