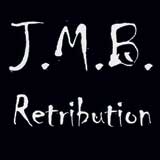 Double check the “sell by” date; this is a journey continuing well beyond its merciful fate and is a sound no longer warranted by the listening public. Eighties hair bands have long since shorn their locks in favor of burrs and comb-overs. Sure, there are still mullets found on foreigners in parts of Europe and Asia. Hell, last time in NYC, I saw a couple damn Yankees with such shags, though I did sense a bit of irony there. Retribution, the debut from J.M.B., is a time capsule — once the sarcophagus was opened, the gas killed the first three miners who dared inhale the poison in a great white plume of smoke. It’s a testament to this motley crew that they still fly the tattered flag of metal, this style of which has long been sent down the river Styx to meet its maker. That it’s sincere pains all the more.