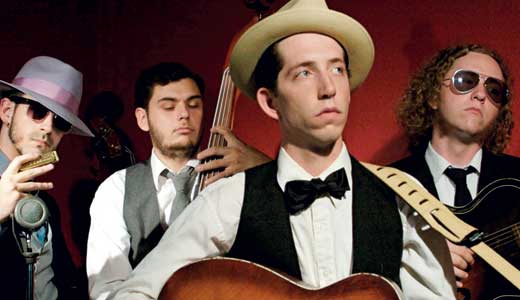 The first thing you notice when you see Pokey LaFarge is that he dresses sharp and smiles big. When you hear him sing and strum with the South City Three, the next thing you’ll notice is that you’re stomping your foot, shaking your ass around and having a real fine time of it.

“Things come and go, but I’m not gonna come and go — I’m gonna be around for hopefully 40 years,” says LaFarge. “If I’m alive, I’m gonna be playing music, doing my thing, but it’s gonna be very much my own thing. I’m a musician, I’m a performer, this is what I want to do.”

Of all the performers I’ve ever known, LaFarge stands out as the one with the fewest options for a straight job: With P.T. Barnum’s knack for self-promotion and a showbiz IQ approaching that of Frank Sinatra, there’s just not much else he can do as well as he can write songs and jump around a stage singing them. In a word, he’s a natural, and he’s aiming for the brass ring.

“Even though it’s not what you’d call totally modern music, I think people can still relate to it, and they seem to be having a good time at the shows, getting down with it, and we’re certainly lucky. But the thing I get kind of frustrated about — being that I’m really passionate about American music — I mean, it’s what makes us purely American.

“Traveling around the world — it kinda makes you look at what it means to be an American. We’re actually forced to defend ourselves a lot in Europe. But, you know, we have the best music in the world. We invented ragtime and country and jazz, rock ’n’ roll. We’re so culturally rich, and I’ll be damned if it’s gonna be watered down by my generation.”

The way LaFarge sees it, his duty to his audience is of singular importance. For all the emphasis on good-time feelings, though, LaFarge’s brand of ragtime blues, Texas swing and country blues (“Riverboat Soul” has been self-applied) is neither casual nor incidental. He understands very accurately where the music comes from and what his place is in a creative dialogue with the past.

Perhaps more importantly, though, he understands the way the dialogue can be tilted and banged on like an old pinball machine that still lights up and pays back to audiences who may be unaware of how much the sounds of the early 20th century still have to offer.

“People that go out there and call what they’re playing folk music or whatever the hell it is, and the only thing that associates it with early music is the fact that they’re playing a banjo, but they ain’t playin’ it right! The Avett Brothers takin’ a five-string banjo and strumming it like it’s an electric guitar … I mean, I just don’t understand. These are things that are very important; if it’s folk music, you should be looking back before you look forward. The people that came before you, they kind of knew what they were doing. They are legends for a reason. For lasting power as a musician, as an artist, you should know where you come from. My heroes — Milton Brown, Bob Wills, Bill Monroe, Jimmy Rogers — these people literally created their own sound, and that’s my own goal … to create a sound.”

It’s been four years since Pokey LaFarge high-tailed it out of Louisville to answer the call of the road, and to say that he put down roots in St. Louis would sort of miss the point. While the “Gateway to the West” has certainly been kind to him, lately it’s just another spot to stow his guitar and hang his hat for a spell between shows.

“I’m not trying to get in on some kind of indie fad, you know, trying to get big overnight. If I was trying to do that, I would have started that years ago. To have staying power, you’ve got to have integrity and stick to your music and keep working hard. I think people recognize that as legitimate, but you have to establish your legitimacy. You have to constantly prove yourself.”