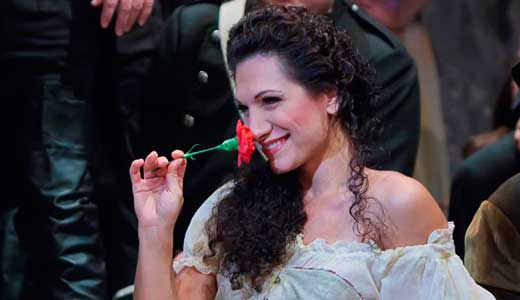 Opera in the 19th century fell pretty much into one of two categories — comedy or tragedy. Either everyone ended up dancing happily around the stage, or dead on the floor in a pool of blood.

So it was a problem for composer Georges Bizet when his new opera “Carmen” was set to premiere in 1875 in Paris at the Opéra-Comique — a venue that presented only comic operas. A problem because Bizet’s title character ends up dead. There was also the question of Carmen’s seductiveness and easy virtue. And girls who come out on stage smoking cigarettes. None of which fit with the family-values fare normally offered by the Opéra-Comique.

In recalling the story, Kentucky Opera executive director David Roth says the producers asked Bizet, “Isn’t she killed by her lover? And what about all these gypsy people?

“Bizet assured the producers that the character of Carmen would be toned down, and the gypsies would be comical,” says Roth. “And he promised that the librettists would kind of sneak in the death scene at the very end of the opera.”

But even with the promises, a nervous manager pleaded with Bizet, “Please try not to have her die. Such a thing has never before happened on the stage of the Opéra-Comique.”

But die she did, and die she will again — this time on the stage of the Brown Theatre, as the Kentucky Opera presents “Carmen” in three performances this weekend and next.

The opera begins in the Spanish city of Seville, where Carmen, the beautiful gypsy girl, works in the cigarette factory by day but is part of a ring of smugglers by night. It is in Seville that soldier Don José falls in love with Carmen, and she with him. But later, Carmen meets the dashing matador Escamillo — and the love triangle is set.

Three famous musical themes are heard in the opening act: the “Toreador Song,” Carmen’s “Habanera,” and the so-called “Fate of Carmen,” which foreshadows the tragedy.

Bizet does inject a little humor into the story, and much realism. This is not some dreamy allegory of gods and nobles, but a gritty tale of real people behaving as real people will, which, along with the music, may be why “Carmen” remains one of the most-performed and best-loved operas.

If Carmen is free with her love, what of it? That’s life. And poor Don José — if he can’t see that he would be far better off with the wholesome young Micaëla than chasing Carmen around the docks and in and out of jail, well, that’s life, too. Don José (sung by Scott Piper) and Micaëla (Heather Phillips) sing a beautiful duet in Act I. But Don José would rather make music with Carmen. What’s new?

So Carmen is actually a kind of love noir story. Good people mixed up with a seamier set — a tale of gypsies, tramps and thieves.

“Carmen is always falling in love with the wrong guy,” says mezzo-soprano Tara Venditti who stars as Carmen. “Everything with José is a big drama. Nothing works. They fight, and they try, and it never comes together. Until finally she says to José: ‘You don’t belong with us. Get the hell out. Don’t you see this doesn’t work?’

“Then she finds Escamillo (Michael Mayes), who is like a rock star of the bullring,” Venditti continues. “Escamillo comes to find her in the mountains because he is so taken with her. Like a conquest. He’s the rock star of Spain, and she’s like the Star Level Five gypsy. Gypsy girl, gypsy princess.”

“You have to excuse me for being so wound up,” she says. “Today in rehearsal we staged the death — and it is terrifying. The audience will actually get goose bumps — and if I sound excited, it’s because it is so really exciting. So emotional.”

She takes a big breath, then exhales. “I just came back from the gym, because after he killed me this afternoon, I said, ‘Oh, my God, I have to get to the treadmill.’”

Venditti, an American, has been performing in Europe for the past seven years, mainly in Germany. She made her debut at the Royal Opera House, in London’s Covent Garden, and has sung at La Scala in Milan. Here, she notes that the smaller Brown offers a big advantage in creating Carmen. “So, I don’t just have to blow it loud all the time to fill those huge halls. I can come down in the dynamics, just as Bizet has written. To show the vulnerability in the character, I can go down to a pianisssi … issi … issimo.”

And then the death.