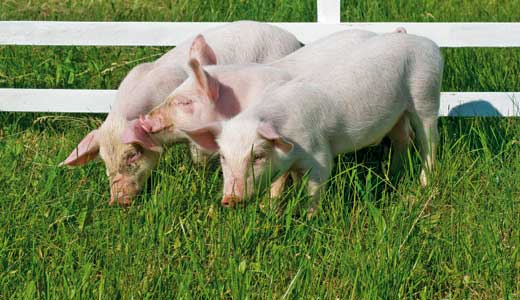 A few months ago, I wrote about my month-long vegan challenge. Since then, I’ve been wrestling with my food choices, trying to decide which path I want to take. I’m definitely not vegan; the further away I get from the challenge, the more apparent that has become. But it has made me much more aware of the meat I do eat; I never take a bite of meat without wondering where it came from.

In the middle of my challenge, I went to a Slow Food Bluegrass dinner, where we ultimately caved on our challenge. In my defense, I had originally accepted the challenge with the caveat that I already had tickets to the Slow Food dinner, and that I was going to eat meat there. As our challenge progressed, we were enjoying being vegan so much that my boyfriend and I proclaimed that we were going to stay vegan even for that meal. (You already know how this ends.) The food ended up in front of me, and I ate every morsel. It was scrumptious. I didn’t stray from the challenge for the rest of the month.

I really enjoyed my vegan adventure, and I seriously considered changing my diet for the long term. I came up with lots of different eating plans, but the only hard and fast rule I had created for myself was that I didn’t want to eat any little piggies. In truth, I’d much rather opt to eat vegetarian than eat meat from an unknown source.

There are many things to take into consideration when thinking about meat, beyond the straightforward question of whether it’s ethical to eat animals. There are environmental issues, health issues and issues relating to the humane confinement of food-animals.

One of the things that’s interesting about pastured and humanely produced meats is that they can eliminate most of the arguments for not eating meat — with the obvious exception that you are still eating an animal.

At the rule-breaking Slow Food dinner, I introduced my dad to a chef friend, Jay Denham, who cures his own meats. He had tasted Jay’s hams at an event the year before and had been talking about them ever since. He put in an order for a whole ham, all the while teasing me for being vegan — and a fair-weather vegan at that.

The arrival of the ham may have been my true downfall. Luckily, the ham didn’t actually arrive until my vegan challenge had officially ended. I noshed and nibbled while I watched Jay help my dad get set up with his ham.

Before becoming an artisanal cured-meats aficionado and cure master for West Virginia’s Woodlands Pork, Jay was executive chef of Park Place. At Woodland, as the name implies, Jay’s pigs are finished in forested areas. The pigs are fed a traditional diet of acorns, hickory, persimmons, pawpaws and other items from mast-producing trees. Before that, the pigs are moved through different fields in a holler, foraging on plants. Their main staple is barley, but they are also fed beans, corn and squash. Ham enthusiasts swear the diet has a significant impact on the flavor of the meat and results in a higher quality product.

Jay spent the Fourth of July receiving an award at the White House for his hams, so they’re pretty good, I guess.

Jay has plans to open a cured meats facility in Louisville in the coming year, in a 64,500-square-foot building. Woodlands Pork will process and cure meat on site, using their own pastured meat. In the future, they hope to find additional local farmers who can pasture-raise pigs finished on mast. In addition to cured meats, they also have plans to produce cooked meats like sausage, mortadella, bologna and salami.

I grew up vegetarian — and Jewish — so pork has basically been the one thing I’ve never really eaten. Ironically, it took me finding a Jewish boyfriend who loves pork to get me to eat it. My father never ate meat either until he had a life-battling illness, but since then he has been an enthusiastic omnivore, often overcommitting to large orders of meat that would take him decades to eat by himself. It should be no surprise that this leg of ham falls into that category.

My mother doesn’t eat ham, and the two of them are empty-nesters, so it took about a month for my dad to fully lose interest in the ham. And let me clarify: He didn’t lose interest in eating the ham. He lost interest in having to break out the giant 20-pound ham leg and struggled with slicing it paper-thin.

Cutting this kind of ham is an art form in and of itself. Jay spent four months studying with the most revered Italian cure master, Massimo Spigaroli, in Tuscany and Parma, learning the art of raising, butchering, curing, cooking and cutting meats. He is one of the few Americans doing anything like this in the United States.

Jay’s meats aren’t available at any local restaurants yet, but when the processing plant opens, Louisvillians will be in for a treat.

There are times when I eat meat with confidence, knowing that the animal I am eating lived a happy life until its end. Jay’s hams fall into that category. I can live with the fact that they probably didn’t die free in the wild. It’s maybe enough that they lived a good life.

So despite my resistance to eating pork, I now have the last thing I ever imagined I’d have on my dining room table — a leg of ham. Luckily, Jay came over and gave me some lessons on slicing it.

I still don’t want to eat little piggies, but, man, Jay’s are good.