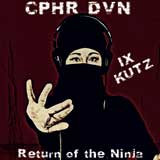 Sincerity goes a long way. Selling it. What could be perceived as outdated or stale could be made fresh depending on how you go about it. What are croutons but old bread, yet I can’t eat a salad without them. Cphr Dvn is the duo of Wize Cypher and Sultra Diviine, a group whose sound and message echoes that of ‘90s hip-hop mainstays the Boogiemonsters with bits of Wu thrown in. First listen brings questions of necessity, as hip-hop is not a backward-looking art form. Throwback is good for jerseys and sunglasses, not ears. Follow-up listens are more endearing, in the flipping of familiar sample sources and the album-length conceit describing the nine levels of power of ninjitsu. From nearly anyone else, this premise would be trite, clichéd or overpoweringly heady. Cphr Dvn makes it work through sheer force of personality. This isn’t characterization. Sullied only by an extended spoken-word vamp on the best song (“TOH: Harmony”), IX KUTZ is a worthy addition to a banner year for Louisville hip-hop.