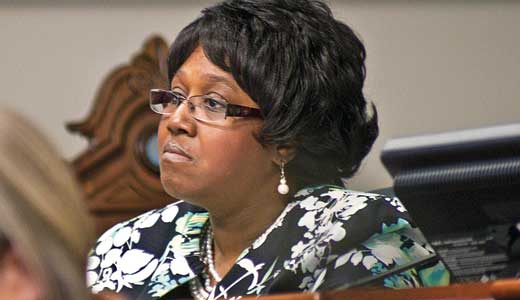 Nearly 50 supporters of embattled Metro Councilwoman Judy Green gathered in the Louis H. Coleman Jr. Community Center on the night of Sept. 8, their voices joining together in an anthem of the civil rights movement.

Ain’t gonna let nobody turn me around

Marchin’ down to freedom’s land.

As the song continued, Green entered the room with impeccable timing, marching down the center of the aisle to a standing ovation.

The rally was organized by Concerned Citizens of District One (CCDO), a group of Green supporters that spent the week hurling accusations of racism toward the Metro Council, which was inching closer toward its unprecedented expulsion trial of Green.

But those accusations were just an appetizer to the main course of over-the-top rhetoric in defense of Green, as speaker after speaker criticized the council and the media, and compared Green to Jesus Christ and Martin Luther King Jr.

During the rally, Green defiantly expressed she would not resign. A mere 14 hours later, however, she did just that, submitting a two-sentence resignation letter to the council. Her resignation marked the end of a tumultuous year of scandal involving ethics violations surrounding appropriations she directed toward the nonprofit 100 Black Men, as well as the Green Clean Team, a summer jobs program that employed several members of her family.

Despite her resignation, the Metro Council voted unanimously to go forward with the expulsion trial on Monday. As a result, the council’s attorney meticulously laid out evidence demonstrating Judy Green was prosecuted due to an intentional violation of ethics laws — not because of her race.

Those attending Thursday’s rally were encouraged to fill out a sign-in sheet that referred to Councilwoman Green’s treatment as a “lynching.”

For the past week, this has been the standard fare dished out by Concerned Citizens of District One. For example, saying the expulsion trial was only proceeding because Green is black, CCDO called it “the New Jim Crow.” An essay by member Gracie Lewis handed out at the rally explicitly called the council’s prosecuting attorney “racist to the core.” The speakers that preceded Green’s address to the crowd went even further, saying her expulsion also served as the de facto disenfranchisement of her mostly black constituents.

“Think of how many of us died and bled to give us the privilege of voting,” said Bob Cunningham, a longtime civil rights activist. “If they can get away with this they will set a precedent, so that whoever you elect, if it’s not who they want they will remove him or her and place whoever they want.”

Cunningham further compared the ethics rules that Green was found to have broken to laws allowing slavery and segregation.

“You are not wrong because you break a bad rule. Dr. King broke the rules every day. A runaway slave was breaking the rules,” Cunningham said. “You were guilty. You were guilty of doing your job too well.”

Local civil rights icon Mattie Jones turned it up another notch in her fiery speech.

“I was at the hearing of Councilwoman Green each day,” Jones said. “I sit there and I begin to ask myself, ‘Do they know that I’m attending this Klan meeting?’”

Jones went on to denounce black Metro Council members as being stuck on “the plantation,” comparing the current environment to “Mississippi in the 1800s.” (For the record, neither Jones nor CCDO spokesperson Jesse Harris actually live in District One.)

The lines were clearly drawn: You’re either with the Jim Crow-era racists who want to strip you of the victories of the civil rights era, or you’re with Judy Green — choosing to excuse or even celebrate her ethical lapses

But not everyone in the Louisville civil rights community agrees with the opinions of Concerned Citizens of District One.

Raoul Cunningham, president of the Louisville NAACP branch, says one has to actually look at the make-up of the Metro Ethics Commission that determined Green was guilty of violations.

“Everyone has a right to say what they believe and what they think,” he says. “But I would point out that the ethics commission was made up of seven individuals, three of them being African-American. And their vote was unanimous.”

The local NAACP president is not sure whether the anger will fade with Green’s departure, but he thinks it is time for the city to move on from this drawn-out saga. “Everyone is entitled to their opinion, but it’s now time, with her resignation, for the community to start moving forward.”

As Judy Green and her husband James addressed the crowd Thursday, another public enemy emerged: the media. Very specifically, Dan Klepal of The Courier-Journal, who has covered her scandal thoroughly.

Green’s attorney had previously attempted to delay the trial by presenting an affidavit from her doctor claiming she was not healthy enough to stand trial; the council voted unanimously to deny the request because it was so vague. James Green excoriated those who believed his wife wasn’t really ill, attributing their skepticism to the fact that Green, her attorney and her doctor are all black.

James Green went on to accuse the media of withholding the truth in their coverage, a topic Judy elaborated on as she took the podium.

After opening with a vague statement that people “who may not be my friends” were present — presumably talking about reporters — Judy Green facetiously thanked the local media for making her “a celebrity.” After listing some of what she deemed falsehoods printed about her in the media, Green directly called out Klepal.

To which Klepal calmly replied, “That’s what the internal auditor said.”

But Green was not finished with Klepal, as she criticized his work more than 10 times in her speech. Eventually, the crowd picked up on Green’s animated cues, prompting a few to shout toward Klepal statements including “racism” and “we’re dealing with pure evil!”

As the brouhaha unfolded, Klepal tweeted: “I sure didn’t figure to have such a big role in Judy Green’s speech. Thankful for at least one friendly face in the crowd. Strange night.”

Strange indeed, with a very ugly vibe, to boot.

WFPL’s Phillip M. Bailey — who broke one of the big stories on Green for LEO Weekly this Spring, and was subsequently called “scum-of-the-earth” by her — declined to cover the rally, telling LEO that he expected it to be nothing but an over-the-top “point the finger at the media” screaming match.

Green further indicted others in the media, her accusers, Council President Jim King, and the entire Democratic caucus of plotting to destroy her.

For all of the talk of Judy Green being “crucified” and denied “due process” and “equal protection,” it should be noted that she and her attorney, Derwin Webb, declined to submit any evidence, documents or witness names to the council for her expulsion trial, or to comply with any subpoenas.

At the beginning of the trial on Monday, Webb made a motion to expedite her resignation from the council and end the proceedings. The motion was rejected by a 20-0 vote.

With that, Webb announced he was exiting the building, leaving the charging committee’s lawyer free reign to lay out a well-documented case that Green knowingly violated ethics rules, without any rebuttal or cross-examination of witnesses.

Two key witnesses on Monday, former aid Melody Hill and the Life Institute’s Eddie Woods — both of whom are black — laid out the evidence of Green’s willful violation of ethics laws. Hill kept copies of Green’s paper trail, and Woods rebutted Green’s claims that she didn’t run the Green Clean Team. Another witness, city auditor Mike Norman, detailed how records showed Green’s family received higher pay than other workers on the Green Clean Team, with some receiving almost $400 for just a handful of hours of work.

As of Tuesday afternoon, Council attorney Gregg Hovious was plowing through another day of damning witness testimony, with the fate of the council’s ultimate decision looking increasingly obvious.