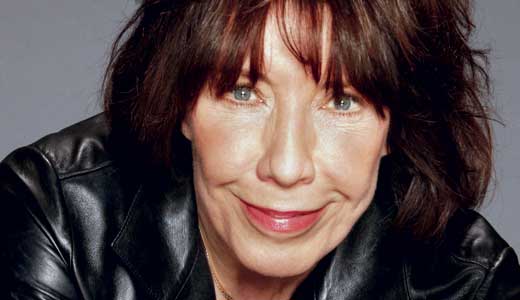 “I’ve always wanted to be somebody, but I see now I should have been more specific.” — Lily Tomlin in “The Search”

It’s hard to make it and even harder to keep it. But for a mainstay comedian like Lily Tomlin, the business of show business is just another art to master. A success in television, film and Broadway, Tomlin has won numerous awards and accolades over the course of her 40-plus year career. Her lengthy film résumé includes Robert Altman’s “Nashville,” “9 to 5,” “The Incredible Shrinking Woman,” “All of Me” and “Tea with Mussolini,” and her TV credits list “Laugh-In,” “Murphy Brown” and numerous self-titled specials, just to name a few.

Tomlin is a true character actor — so it’s no wonder she’s had roles in several Altman and Woody Allen films. And speaking of character, she’s got more than a dozen familiar personalities she developed and has maintained since her days on “Laugh-In,” including telephone operator Ernestine, 6-year-old Edith Ann, living beauty expert Madame Lupe and “tasteful lady” Mrs. Audley Earbore III. Tomlin brings these characters and her thoughts on everything from politics to pride in next Wednesday’s “An Evening of Classic Lily Tomlin,” which kicks off the Louisville International Festival of Film. LEO caught up with Tomlin by phone last week.

LEO: What have you been up to recently?
Lily Tomlin: Gosh, let me see. In television, I’ve been doing Lisa Kudrow’s show “Web Therapy,” where I play her mother. That’s great fun because it’s pretty much all improv. I did an “NCIS,” and I just shot a few episodes of “Eastbound & Down.” I have a few tour dates in October and November — I always keep my hand in by doing a few dates every year — you know, 20 or 30 of them.

LEO: What can people expect from your show Wednesday night?
LT: I’m bringing the usual — a lot of characters, some multi-media … clips I put together that are satirical and funny and relate to something specific. It’s not one of those shows where I’m going to show you a picture of my closet. If it doesn’t make fun of me, it tries hard. I’ll talk about Louisville, and I’ll talk about being a human being on this planet and stuff like that. I like it to be very unpredictable.

LEO: If “Laugh-In” were on TV today, do you think it’d be a hit?
LT: Yeah, most likely, if it was relevant to today’s audiences. I think a show like that would go, very much. I mean, variety shows have been in disfavor for a long time now — except for “Saturday Night Live.” A lot of people have tried to revive variety, but I think the pendulum swings back. If you think of (Stephen) Colbert and Jon Stewart — they are that kind of show, partly. They’re fixed on politics because more people are conscious of the political scene.

LEO: As a woman in comedy, have things evolved?
LT: When I started out, there weren’t very many women in comedy — certainly not stand-up. Stand-up was theoretically thought of as a male domain. Even when I started, people would say, “Oh, how can you do stand-up? You’re going to lose your femininity.” (Laughs) Because that was the nature of stand-up — telling jokes, hammering — there was some fear audience members had that if a woman was making them laugh, it makes her powerful in some way. You’re exposing your vulnerability somehow. Anyway, all that is hopefully somewhat in the past.

LEO: Who do you think is funny these days?
LT: There are so many people doing comedy. There are many, many people I like — it’s hard to even name them all. I certainly like Stewart and Colbert, Bill Maher and all the political comedians like that. I like Lewis Black and Larry David. Stand-up-wise, I like Wanda Sykes. There’s a young woman not as famous as her — Marga Gomez. She’s really good. There are so many young people doing comedy, it’s hard to keep up.

LEO: How has comedy changed over the years?
LT: I can say that women are allowed to deal with subjects that would have been taboo at one time. And language — the language that is brought into stand-up comedic performances, that was never allowed. Some people use language, and it’s just gratuitous. They think language makes it edgy. What matters is the genesis of the comedy. I mean, Pryor used language, and he
was brilliant.

I don’t think the origins of comedy are different, I just think that so many taboos have been broken down. A show like “Curb Your Enthusiasm” — where the lead character can be such a selfish, self-absorbed person who just flies in the face of anything that’s supposed to be civil or kind — is outrageous and funny and speaks to the culture.

LEO: As a pioneer in pushing LGBT awareness in Hollywood, do you think there are enough gay roles in TV and film today?
LT: Yeah, well sure — if they’re funny and perceptive and good. There’s a fair amount. Ellen has a profoundly popular show and has for several years now. We had “Will and Grace.” We have “Modern Family.” There’s all kinds of roles. The irony is, I’ve read “Modern Family” is the most favorite show of the Tea Party. I was speaking at the gay center here in L.A. and I made the joke: “The Tea Partiers want to see gay people have rights in fantasy but not in reality.”

Shows nowadays have a gay character in them. If the characters are treated just the same as everyone else in this life — I’m sure this all has an impact, so I think it’s great. We even have the Logo network, which seems to be thriving. A lot of people are much more awake and their hearts are open.

LEO: Is Edith Ann into texting, Twitter and Facebook?
LT: Oh, she is! She even has to upload her mother’s iPod. She does all that stuff. I guess she’s 40 years old now, but she’s not in my mind or my heart.

The Incredible Shrinking Woman won’t be the only big name in town this week. The third annual Louisville International Festival of Film will also host a couple of “Saturday Night Live” alumni, while screening a whopping 107 films over five nights.

Chris Kattan (“A Night at the Roxbury”) and Horatio Sanz (whose SNL personas ranged from Kim Jong Il to Rosie O’Donnell) will be on hand Friday at the Bomhard Theater for the red carpet premiere of “Hollywood and Wine.” In this comedy, Kattan stars as Jack Sanders, a man who gets tangled up in mob debt while trying to win back his girlfriend from a suave French guy. Sanz plays Kattan’s key advisor, who only succeeds in getting his buddy in deeper merde.

If, for some reason, you’re nostalgic for Corey Haim, you might consider “American Sunset,” one of the actor’s last roles before his untimely death from pneumonia in 2010. It’s almost impossible to predict these things, but this offering looks to have all the makings of an accidentally funny, cultish film. (Possible pitch: “The Room” meets “Saw” meets every other Liam Neeson picture where an action-dad saves a female member of his family.)

In “American Sunset,” Tom Marlow (Haim) wakes to find his wife missing and a mysterious caller asking, “Wanna play a game?” The unlikely hero (and unlikely leading man, for that matter) embarks on a 24-hour quest filled with phoned-in clues and riddles that inch him ever closer to his distressed damsel.

These are just two in a slate that has grown wildly from last year’s edition of the fest, when a paltry 73 films were shown. In addition to the narrative features program, shorts and long-form docs will also be screened.

Some promising titles from the rich documentary category includes a piece entitled “Hollywood to Dollywood,” which follows a pair of twin brothers on their obsessive attempts to cast Dolly Parton in their movie.