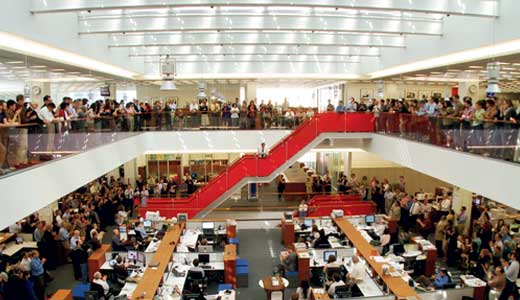 Take a moment and focus on what you’re holding. Feel the thickness of the paper. Listen to the sound it makes as you turn from page to page. Watch how your fingers grab a hold of each page, lifting and turning to reveal a new fount of information. You know the horoscopes and News of the Weird are in the back, but you plow through the meat of the paper to make sure you’re up on the news and entertainment of the week. The act of reading a newspaper is physical. You can tell a story’s importance by where it’s placed on the page. Unfortunately, this age-old tradition of bonding with a physical source of information has been steadily dying since “webpage” was added to our everyday vocabulary — the newspaper is approaching its deathbed faster due to iPads, Twitter, Facebook and blogs.

“Page One: Inside The New York Times” examines this issue by infiltrating the world’s most prominent newspaper to see how it is adapting to new media while trying to stay afloat in a struggling economy. Documentary filmmaker Andrew Rossi (“Le Cirque: A Table in Heaven,” “Eat This New York”) spent a year filming inside The New York Times headquarters, focusing mainly on the Media Desk, which was created in 2008 to report on changes in the media industry.

While the shelf life of the Times and the importance of skilled journalism are debated and hypothesized throughout by NYT bigwigs like media columnist David Carr, media desk editor Bruce Headlam, media reporter Brian Stelter and executive editor Bill Keller, the film also shows the day-to-day operations of the paper — from pitching stories to in-depth reporting to competing for the front page. At almost 90 minutes, “Page One” offers unprecedented access into The Gray Lady, but for those not in the journalism field, it might seem a bit tedious and monotonous in parts.

“The collapse in advertising happened faster than anybody had anticipated … nobody knows where that ends,” says Richard Perez-Peña, newspaper beat reporter for the Times. From there, the film looks at the changing media landscape, including how WikiLeaks has managed to take the wind out the paper’s story-breaking sails, referencing back to the glory days of when The New York Times released the Pentagon Papers in the ’70s.

The effect Twitter will have on the future of media also is debated — as some of the older staffers were reluctant at first to engage. “Really, what could anyone possibly find useful in this cacophony of short-burst communication? But at 52, I succumbed,” says columnist Carr. “Now, nearly a year later, has Twitter turned my brain to mush? No. I’m narrative on more things in a given moment than I thought possible. I get a sense of today’s news and how people are reacting to it in the time it takes to wait for a coffee at Starbucks.

“The medium isn’t the message. The messages are the media.”