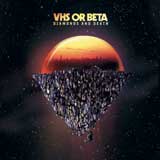 The eclecticism on Diamonds & Death, the third album by VHS or Beta, reflects the broad palette the band exhibits when performing DJ sets and remixing other artists. With all-encompassing musical sensibilities, the band deftly combines familiar elements from disco and electro-house with live drums, slick guitars and even the high-energy arpeggios of Italo. With their magpie approach to production, the band delivers a sound reminiscent of Underworld and Mystery Jets, further supplemented by the British accent with which the vocals are sung (possibly a by-product of extensive touring with Duran Duran and Ladytron). The high-quality production and carefully crafted arrangements culminate with the stand-out final track, “Jellybean,” a cosmic disco instrumental that smoothly transitions between deep grooves and accessible melodies. Without vocals, this track avoids the derivative elements that appear occasionally elsewhere on the record. Diamonds & Death will fit nicely into the retro-flavored collections of indie dance fans.