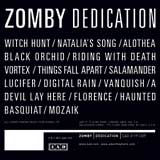 Perhaps the most crippling thing for Zomby is being shaded underneath the vague umbrella term “dubstep,” often defined by its limited womp-womp beat patterns. The latest release put forth by the UK’s quiet MC, Dedication avoids dropping this cliché into the mix and trades it for acidic, 8-bit sounds and samples muffled underneath a tense surface of nearly bassless dance music. He builds the album in pyramid stacks, consistently alternating between beat interludes and lengthier tracks that lay heavy on repetition and the variance put within. Moreover, this draws attention to the less brief songs, as they don’t steep into each other as much; essentially, these shorter tracks are meant to make the longer ones look good. If this is true, then Dedication must be centered around the single “Things Fall Apart,” which features vocals by Animal Collective member Panda Bear, providing a much needed pop relief. As both artists have been influenced by jungle music, it’s a more likely collaboration than it seems. It eventually cumulates down with two dark piano numbers that seep into closer “Mozaik.”