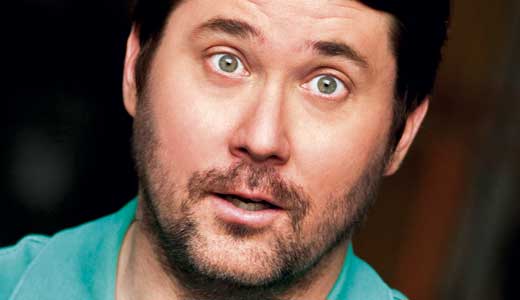 Doug Benson’s “The Benson Interruption” is comedy progress, and not just in format. A new spin on the tired comedy showcase, the show is simultaneously classic and contemporary — and hilariously different. Just like Benson himself.

The show was born as a live performance in Los Angeles, moved to a six-episode run on Comedy Central, and now lives on as a successful podcast. Like its creator, “The Benson Interruption” is constantly evolving.

“The idea comes from the funny things the comedians standing in the back of the room say,” Benson explains. “Surprisingly, all of my comedian friends embraced the idea and love doing the show. Or at least they pretend to like it.”

Benson is best known as the guy from “Best Week Ever” or “Last Comic Standing,” or the movie “Super High Me,” or the podcast “Doug Loves Movies.” The point is that whatever iteration they know, people know him.

“Without any one of those,” Benson says, “there might be 25 percent less people at each of my live shows.”

Simultaneously a comic’s comic and a draw, Benson is a rarity. His cleverness plays to the back of the room he’s so fond of, but he’s also cultivated a loyal fan base throughout the 26 years he’s been on stage.

“My television debut wasn’t until ’89 or so,” he says. “I’m not a big fan of any of my early appearances, because back then there was a lot of stand-up on TV, so you’d get to be on a lot of shows even though you hadn’t completely found your voice. I may still be looking for my voice for all I know.”

Twenty-six years in, Benson is still searching for the perfect joke. Not because he needs to; regularly selling out clubs and getting a ton of TV time would be enough for most comics. Benson pushes himself further because he wants to.

Benson’s ever-evolving voice is on display on his fourth album in as many years, Potty Mouth, which was released Aug. 30.

Four albums in four years, and none of them a slacker’s effort. Benson’s prolific nature fuels his popularity; his draw is so strong because of his relentless ability to stay current. How many comedy veterans have mastered Twitter? How many comedians who appeared on A&E’s “An Evening at the Improv” also have successful podcasts? How many comedians on VH1’s talking-head shows actually love the ’80s because that’s when their careers started?

Benson doesn’t just love movies and love the ’80s — he was an extra in “Blade Runner” and “Fast Times at Ridgemont High.” I ask him if he used the films as credits as a young comic. “Didn’t even cross my mind to do that,” he says. “That would be a pretty cool way to introduce me now. I’ll tell the emcee to say those movies at my next show.”

Steve Hofstetter is an internationally touring comedian who has been on “The Late Late Show with Craig Ferguson,” “E! True Hollywood Story” and more. See more interviews at www.OnComedians.com.