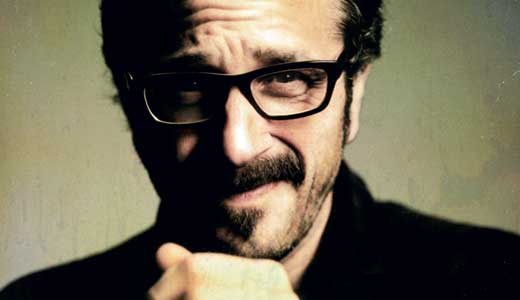 Three years ago, Marc Maron was broke, twice divorced and thinking of quitting. Not the quitting the business — quitting life.

“I thought about suicide a lot,” Maron recalls in his trademark neurotic way. “Not because I really wanted to kill myself. I just found it relaxing to know that I could if I had to.”

But three months ago, Maron was confident, successful and coming off one of the better keynote speeches in Montreal comedy festival history. What a difference 20 million downloads can make.

That’s how many listeners his critically acclaimed podcast, “WTF,” has earned in two years. The second most popular podcast in the world, it’s honest, raw and brilliantly entertaining. Telling a comedian they should listen to “WTF” is like telling a doctor they should consider medical school. And according to Maron, the podcast has a healing quality to it, too. At least, it does for him.

“I started to understand who I was by talking to other comics and sharing it with you. I started to laugh at things again. I was excited to be alive,” Maron says. “Doing the podcast and listening to comics was saving my life. I realized that is what comedy can do for people.”

In 2004, Maron was a guest on my own short-lived radio show, and I was beyond intimidated by how sharp he was. In 2005, I was a guest on his shorter-lived “Air America” morning show, where he took me to task for my ability to market my comedy, hinting that I might be all smoke and mirrors. In 2006, I used that marketing ability to help him deal with the world of MySpace, and he made me deal with his anger and frustration when, like life, his MySpace didn’t work out the way he’d hoped.

In 2010, I ran into Maron on the subway. When I gave him an enthusiastic hello, it was as if he barely knew who I was — odd after we’d spent years chatting in clubs and on the air. But just a week later, he walked up to me at a party and said his own enthusiastic hello, asking how I was doing with genuine interest behind the question.

And that’s Maron — a person who has always been on the brink of both unbridled success and complete breakdown. His life has been riddled with failed projects and failed marriages, so you never know which Maron you’re going to get.

MySpace was a microcosm of the entertainment industry. It was built for a young, hip demographic, saw booms and busts, and had no real place for an uneasy voice of candid reason like Marc Maron.

But MySpace’s brief success led to the launch of YouTube. And YouTube led to the democratization of entertainment on the Internet. And the democratization of entertainment on the Internet led to talent like Maron seeing the medium as a serious channel for creativity. And Maron’s podcast led to him finally finding an outlet in an industry that generally ignored his tortured genius for the better part of a quarter century.

“I started doing a podcast in that very garage where I was planning my own demise,” Maron says, almost choking on the relief of his own emotion. “I know my place in show business now. It’s in my garage.”

Steve Hofstetter is an internationally touring comedian who has been on “The Late Late Show with Craig Ferguson,” “E! True Hollywood Story” and more. See more interviews at www.OnComedians.com.