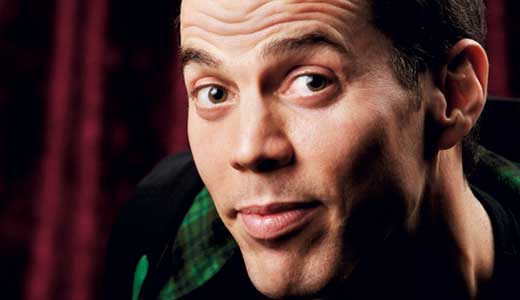 Steve-O is no stranger to the “Why Bother?” Generation. He’s been the go-to jackass on MTV’s “Jackass” for more than a decade. And after a very public battle with drugs and alcohol and the recent passing of “Jackass” co-star Ryan Dunn, Steve-O has come out the other side sober, vegan and regularly performing as a stand-up comedian. Still brave, still a stuntman, he’s ready to put the past behind him — without letting go of it entirely. Steve-O will be at The Improv this weekend.

LEO: Have you ever been to Louisville before?
Steve-O: Really, I couldn’t tell ya’, man. I’ve toured the country and the world extensively, but the last tour I was on, I can’t fuckin’ remember a whole lot. I was wasted. I may have been to Louisville, I may not have.

LEO: You’ve spent the past few years getting sober. How has that changed the way you approach your career?
SO: At first, I was just so fucked up when I started this journey to sobriety. I needed to really just kinda step out of the picture and focus on that. And after a while, I started to doubt if it made sense for me to pursue a career in entertainment. And my phone wasn’t really ringin’ a whole lot; I had burned all the bridges in my career. And then I remember getting a call about being on “Dancing With the Stars.” I thought that would be a good way to kinda test the water and see if it was a good idea for me to continue on in entertainment. That was a fuckin’ weird experience, man.

LEO: I’ve noticed with friends that sobriety almost becomes a new addiction to replace the old one. Is that sort of your experience?
SO: In some ways, it has to be that way, ya’ know?

LEO: Will there be a point where you become too old to keep up with “Jackass”?
SO: In reality, we were pretty well too old to do that shit when we started. That’s how I see it. I’ll always be Steve-O from “Jackass,” there’s no question about that. But I’m interested in having a career beyond “Jackass.” And that’s really what I’m working towards. I don’t wanna have to break bones and shove things up my butt for the rest of my life.

LEO: I would imagine that with everything that happened with Ryan Dunn, “Jackass” has to be more up in the air now than ever before.
SO: Yeah! For sure. There are a lot of different variables — and Dunn is not the least of them at all — that make another movie unlikely.

LEO: How did you react when Ryan Dunn passed away a few months ago? Did that make staying sober more difficult?
SO: In the past, if something like that happened, I would see it as a reason to treat myself worse — and then get drunk into oblivion. At this point … I don’t know, man … the truth is it doesn’t seem real. It doesn’t seem real at all. It kind of hits me in waves … the fact that Ryan Dunn is dead. I don’t think it’s fully sunk in to me.

LEO: Tell me about what made you decide to become a vegan.
SO: Sure, man. My whole vegan trip started out with me doing so many drugs that I was hearing voices, and everything was a hallucination. The voices I was hearing were telling me that there are consequences for everything we do; and I was really afraid of facing consequences for all the suffering I created. So initially when I gave up eating meat, it was out of fear. Then gradually, over time, I decided I didn’t wanna be motivated by fear. I just decided I would be a happier person if I was more compassionate.

LEO: What can people expect at The Improv?
SO: I do stand-up; I also do some tricks at the end of the show. At this point, I feel like I would be letting people down if I didn’t do some of the more outrageous stuff I’m known for. And I’m not ready to let go of that shit, either. I don’t know how to sell tickets to a “Steve-O Show” if I’m just going to stand there and talk the whole time. My primary purpose is to prove myself as a stand-up comic with this tour. That’s really my mission at this point; but with that said, I know what people know me for — and I really feel a sense of obligation to deliver that at each show.

LEO: Looking back, have there been any stunts you wish you had done that you didn’t get to?
SO: I don’t know, man. In shooting these movies, it’s afforded me the chance to do whatever I wanted to … or at least whatever the director wanted. There’s never an end to stupid shit to come up with. And if we were so inclined, I think we could just about continue forever … because there’s more dumb ways to do shit than there are smart ways.