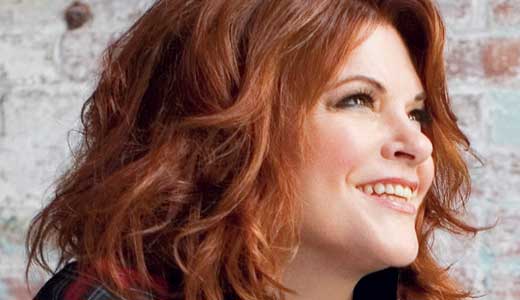 Acclaimed singer-songwriter Rosanne Cash comes to the University of Louisville Kentucky Author Forum Monday for a well-paired interview with Nick Spitzer, the host of public radio’s “American Routes.” Cash recently published her memoir, “Composed,” and is already thinking about starting a second volume.

LEO: You’re coming to Louisville for a talk, instead of a performance.
Rosanne Cash: I know, I haven’t been to Louisville in a long time, so I’m really looking forward to it.

LEO: What kept you away from us for so long?
RC: I don’t know! (laughs) Someone tells me to show up somewhere and I go, and no one told me to show up in Louisville for a long time!

LEO: Do you have any fond memories of us?
RC: Well, King’s Record Shop, of course. That was a great moment, going to that store. I’m so sad it doesn’t exist anymore. There’s something to be said for brick and mortar record stores. I found a lot of records that way, flipping through the racks.

LEO: Do you enjoy doing interview shows, as opposed to putting on a full concert?
RC: I like it — it’s fun. I like the give-and-take. I particularly like the Q&A session. It interests me — what people think about, what moves them. I’m a social animal. I was doing one of these the other night, and some guy asked about the bass part on a song I had recorded. I love that!

LEO: You’ve got your book, “Composed,” to talk about, and (recent album) The List —
RC: And (greatest hits collection) Essential that came out on my birthday.

LEO: Do you think it’s because of your age, or just your feelings right now about your career, that you’re in a reflective period?
RC: Well … partly? I mean, I’d hate to think it’s just that end-of-career, end-of-life thing, but I think I’m at the point where I have to reassemble — look at the past, draw from it, get another plan together, draw on the best of it to see the future, you know?

LEO: Absolutely. I wasn’t thinking about it as an end, more like a halfway point, where you —
RC: Yeah, re-gather your resources. But, see, some people tell me they don’t want an Essential done on them, because they think it means end-of-career, like it’s over. I didn’t take it that way at all.

LEO: How comfortable do you feel telling stories that not only represent you, but also other people, in your books and songs?
RC: Well, I don’t feel any responsibility for being factual in songs. I take poetic license left and right. I used to teach a songwriting workshop; a lot of young songwriters, I would suggest a change and they’d say, “That’s not how it happened,” and I’d say, “There’s no fact-checker here.” But, in the memoir, yeah, I felt a responsibility to be factual. In fact, I checked things out with my sister: “Do you remember it like this?,” because I think, if it’s got memoir on the cover, then it has to be factual.

LEO: Would you say that all songs are fictional by definition?
RC: No, I wouldn’t say they’re all fictional; they’re certainly drawn from my life. I haven’t written anything I got from television.

LEO: What do you think it is about writers that makes us want to describe things to other people?
RC: Oh, God, that impulse is as old as we are, isn’t it? To tell stories, to document, to observe … As an art fan, if I stand in front of a painting or hear a song that moves me and makes me think about my own life — that’s a common need in all of us, isn’t it?

LEO: Do you ever feel competitive toward other writers or songwriters?
RC: Is it awful if I say yes? (laughs) Of course I do! If I hear a song by Elvis (Costello) or Steve Earle and I go, “Damn! How did they get that one?”