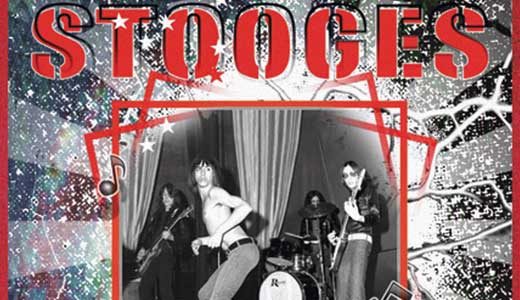 ‘The Stooges: Head On — A Journey Through the Michigan Underground’
By Brett Callwood. Wayne State University Press; 200 pgs., $19.95.

“It’s a good book. I thank you for writing it.” —Iggy Pop

Departing from their experimental and psychedelic roots in the late 1960s, The Stooges played heavy, aggressive rock ’n’ roll that set the stage for the punk rock revolution. Iggy Pop’s stage diving and spitting on the audience was genius born from temporary insanity — thoroughly imitated, in time becoming the standard punk rock experience so many thrived on in adolescence. Their legacy has endured for more than 40 years, maintaining enough momentum for the surviving Stooges to enjoy success after their 2003 reunion at Coachella, going on to record The Weirdness in 2007.

“The Stooges: Head On” draws distinct differences between Stooges members in the introductory chapters, driving home the fact that the band was composed of distinct personalities. This well-researched biography spends time equally among members, ultimately focusing on the evolution of the group, with Iggy’s overwhelming persona taking precedence at times. They give the legendary rock star a healthy dose of mortality by showing us the real man off-stage. The older, wiser Stooges and ex-Stooges confide their petty squabbles, violent outbursts and drug-fueled moments of insanity.

Vivid pictures of early performances, courtesy of author Brett Callwood’s meticulous research, show us the band’s immediate departure from their peers and influences. Scenes glimpsed early on from the varied impressions of early Stooges’ managers, friends, fans and the band members themselves preface their public debut nicely. Understanding the impact The Stooges made on their early audiences — a musical progression that went from smashing objects and using appliances on miniscule stages and in living rooms to writing records and playing concerts, and the antics of these reckless teenage rockers at the end of the flower-power era — gives the reader a front-row seat to the chaos that coalesced into legendary rock ’n’ roll.

There is a feeling throughout the book that Callwood is a rock fan who took up journalism, not the other way around. After success with his biography on the MC5, Callwood elected to further fuel his fanaticism for early Detroit rock (and the city itself, where he moved to from London at the end of this project) by calling on Michigan contacts and beginning a long search for the story. He fanatically lays out an in-depth history of the group, refusing to leave out any relevant detail.

“Head On” is chapter after chapter of stories that are stranger than fiction. The largely unedited stream of information from those who lived through the times lends humanity and credibility, thus the reader registers them as rock history, not legend. The contrasting perspectives of the Asheton brothers, guitarist Ron and drummer Scott, whose testimonies are unique to this book, shed contrasting light at times, with each brother placing importance on different aspects of the same events. Similar contrasts — from a mosaic of album reviews combined with interviews and anecdotes — paint a larger picture that forms in the mind over several chapters, rather than on a single page.

Including small character traits, like Ron Asheton’s affinity for war memorabilia, sets Callwood’s book apart from other biographies that focus only on Iggy. “Head On” includes a surprisingly generous allocation of time for all members. Consequently, the density of “Head On” may be daunting to an uncommitted reader. Callwood’s book appeals to aficionados and music historians, rendering a lively biography that spares no detail, showing that The Stooges — not just frontman Iggy Pop — are rock ’n’ roll icons whose relevance endures.