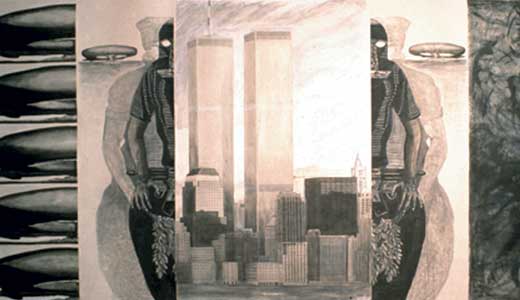 It’s hard to believe the 10th anniversary is almost upon us. In what falls into the “lest we forget” category, an exhibition like “In the Course of Human Events 9/11-2011” at the Louisville Visual Art Association helps us relate to the tragedy.

Sept. 11 has been labeled the most photographed and videotaped day in history. Most of us were dumbstruck in front of our televisions looking at those images. Yet there are a few locals who were near the tragedy as it unfolded. Shannon Westerman, LVAA’s executive director, lived a mile and a half from the World Trade Center. That makes this exhibition personal, but as he explains, “This is not an ordinary art exhibition nor memorial only. The show provides a framework … from which Kentucky and Indiana residents may reflect and explore the impact of 9/11 on their lives.”

“Finding the right words to address the horrors and terror of Sept. 11, 2001, and the following decade is difficult due to the many lines drawn in the sand,” says curator Aron Conaway. “There is little point in explaining or describing anything ‘official’ about that day, the following months and years. The unfolding narrative of the last 10 years has had, and will continue to have, a monumental effect on the lives of every American citizen at every socio-economic and cultural level.”

Conaway chose work by 30 artists, all with their own story to tell. But Sharon Scott wants to know yours. “Remembering 9/11” starts with a blue school desk. Her instructions are simple: “Take a seat, don the blindfold, then remember 9/11.” Your memories become part of her art.

Many of us can relate to “Shock” by Balthus Priest. The graphite and colored pencil drawing of a person with a wide-open mouth, grasping the TV remote, has to be a mirror image of most Americans on Sept. 11. Priest calls the look “the shock of the moment of discovery.”

Fred DiGiovanni was in New York City in 2001. His series “9/11 Memorials” was photographed on Sept. 14 as he walked around Lower Manhattan. “Ground Zero” was made a month later when, he says, “the structures were still smoldering.”

Visual images are a fast way to be transported in time and place. Audio does that trick as well, like the bells in Hallie Jones’ video “Theory of Melancholic Rhetoric,” which shows people emerging from smoke. The gallery is made solemn by its tones.

Occasionally predictions do come true, as in “Images Toward a New Millennium.” You can bet Arturo Alonzo Sandoval wished it wasn’t so.

“In 1990, (I created) four large-scale drawings … for developing future artworks about horrific events,” he says. “All content would be inspired by prophecies of Nostradamus. The drawings incorporated imagery of iconic New York City landmarks, and all images preceded the Sept. 11 terrorist attacks on the World Trade Center.”

Conaway has organized the free program “Looking Back — A Day of Remembrance” on Sunday, Sept. 11. He’ll also be the speaker at LVAA’s monthly lunch and lecture series “Food for Thought” on Tuesday, Sept. 13.