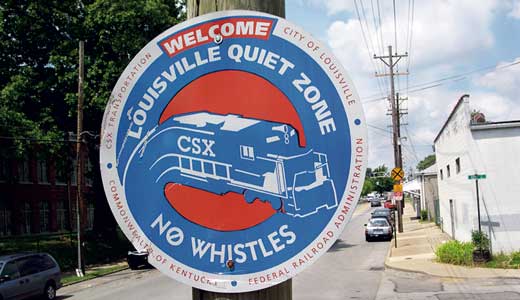 Louisville, like any city, has its shortcomings. Gloppy summer air. High school cliques preserved in amber. An international airport, if you’re a box. All in all, though, Louisville is a nice place to live.

Louisvillians enjoy renowned Actors Theatre, an enviable parks system, the Louisville Orchestra (let’s hope), HQ for Fortune 500 companies, a vibrant local music scene and public radio station. Louisville is a surprise to those who previously thought only The Derby, right? Or is that Lexington?

Like citizens of any mid-sized city, Louisvillians do hope to distinguish our burg, which over the last four decades has progressed from a glum pass-through town with a scrap-strewn riverfront. Too bad, then, that Louisville Metro sounds like a company-owned mill town dozens of times each day due to the railroad lines that snake through most of the city.

In general, as trains approach street crossings, locomotive engineers are required by the Federal Railroad Administration (FRA) to sound the horn in specific patterns and durations, regardless of the hour or population density. As a result, tens of thousands of Possibility City’s residents must endure, in a visceral sort of maddening way, and on some days more than 30 times, the blast of a train horn.

But this noise pollution doesn’t have to exist. In some parts of the city, it already doesn’t. In fact, virtually all of Louisville Metro could be train horn free. The how is known, which leaves just doing it.

Until the early 1990s, municipalities had informal agreements with railroad carriers to not sound train horns in densely populated areas. Because of increasing driver abuse of this understanding, however, the FRA began requiring the sounding of train horns. In Jefferson County, the quiet was broken in 1992. Except, not in the Crescent Hill area.

Since then, the Democrat has worked with Metro Public Works, CSX and the FRA to maintain Crescent Hills’ quiet zones. This has required diligence, forethought and creativity, plus the help of many, including Louisville Metro transportation planner Tammy Markert.

A quiet zone must fall under the FRA’s “points threshold” to ensure safety. Improvements to a crossing can bring it under this threshold, sometimes not.

Ward-Pugh was faced with a financially unworkable crossing at Frankfort Avenue, where Weikel and New Main intersect at severe angles. It looked like this quiet zone, which extended to Jane Street, would be lost. But then Markert suggested turning two quiet zones into one. Crescent Hill’s second quiet zone, from Jane Street to Chenoweth Lane, had points to spare. By combining the zones and averaging the points, the new single zone was below the maximum. “It turned out to be a brilliant move on Tammy’s part,” Ward-Pugh says.

It can be done. “There’s no reason why Jefferson County, from head-to-toe and side-to-side, shouldn’t be quiet,” Ward-Pugh says. “I think we can get there if in fact the Metro Council and, I believe, the new mayoral administration, begins to assess Jefferson County in its entirety.”

Establishing a quiet zone means dummy-proofing the crossings. Traditionally, crossings have been blocked by gates that made crossing the tracks difficult but not impossible. Dummy-proofing makes it physically impossible to cross the tracks. The gates are extended “from ditch to ditch.” A median going right up to the gates is built on both sides of the crossing, and signs state “No Train Horn.” For many crossings, perhaps most, creating a quiet zone is that straightforward, once assessments have been made and approvals obtained.

Some crossings are more complicated. The crossing at Lyndon Lane involves multi-cycle lights that stop traffic anyway, plus other traffic flow inhibitors. Such crossings would typically require four new gate mechanisms plus road engineering, expensive projects in both implementation and assessment. Two crossings that seem similar in requirements might not be: In St. Matthews, $33,000 was spent at Hubbards Lane, while $135,000 was spent at nearby Chenoweth Lane because of a more complicated traffic pattern and more businesses.

At the other end of the spectrum, many quiet zones in Crescent Hill, St. Matthews and Anchorage underwent only simple improvements, which imply a fair amount of politicking and wiggle room. As Councilman Ken Fleming, R-7, explains, “There is a radius the FRA looks at in terms of having a major modification in one place and some modifications in close proximity to the main crossing. There’s a little more leniency.” And so the major crossings can carry the minor crossings in between.

Ward-Pugh supports assessing Louisville Metro for population density, creating the most encompassing quiet zones first to begin, say, a five-year project of quieting. “The only thing that would delay this,” she says, “would be finding the funding to implement what’s necessary to make each crossing quiet.”

Realistically, though, this issue is not a priority on the council or in the Mayor’s Office. “I don’t think it’s a top-tier item on anybody’s agenda, in terms of trying to look at it as a concerted effort,” Fleming says. “Then you have to look at the cost of doing this. To have the configuration that’s required to have a quiet zone, it’s a good chunk of change. And so that right there, you have to look at it just from a stewardship standpoint, how much is it going to cost to put the whole county in a quiet zone. That’s going to be x millions of dollars, and is that the best use of the people’s money?”

With the full recovery of local taxes years off, the quieting of train crossings is a want more than a need, politics aside. But then, maybe emerging places decide to address some of the wants along with the clear needs, simply as a philosophy. In a community that has provided a $1.5 million forgivable loan to save the historic Whiskey Row buildings, or for that matter given $90,000 to look for a pro-basketball team, one would think comprehensive quiet zone funding, gained methodically, might be found. Maybe partial funding could come from the Metro Council’s discretionary capital infrastructure funds, which total, collectively, $2.6 million annually, or $13 million over that five-year period.

It’s of interest to know, if only as a general reference point, that the Metro Public Works Department has a 2010-2011 budget of more than $87 million. The Department of Public Health and Wellness, with a mission to improve well-being, has a budget of almost $31 million.

Apart from the sheer aesthetics of a train-quiet Louisville Metro (sort of the civic equivalent of zipping up our fly), the physiological benefits of reducing noise pollution are well documented. Rohko Kim of the World Health Organization states, “When someone is sleeping and the sound level increases, even though the person is not aware, not conscious, the heart rate is increasing and the blood pressure is increasing.”

Western Europe takes noise reduction and elimination seriously, in part because it’s harder for Europeans to get away from noise. The United States once held a similar view, opening the Office of Noise Abatement and Control in 1972. Ronald Reagan closed the office in 1982.

Fleming believes city government should be as nonpartisan as possible, and that for the most part it is. He and other Republican council members have worked to quiet sections in their respective districts, as, of course, has Democrat Ward-Pugh. But when depicted as a cohesive effort, quiet zones seem to make party lines visible.

I had planned to interview my own councilman, Kelly Downard, R-16, until a representative of the council’s Republican caucus contacted me. He said Councilman Downard would be happy to meet, but considering no tracks are in District 16, and the fact that he has received just one complaint regarding the horns, Downard doesn’t consider this an issue for his district.

Maybe Councilman Downard’s perspective is representative of a district-centric council. True, District 16 has no tracks, but neighboring Districts 17 and 18 do, exposing those in District 16 to the horns. When I asked Ward-Pugh if Metro Council saw this problem as a countywide issue, to be addressed by a unified effort, she considered briefly, then said simply, “No.”