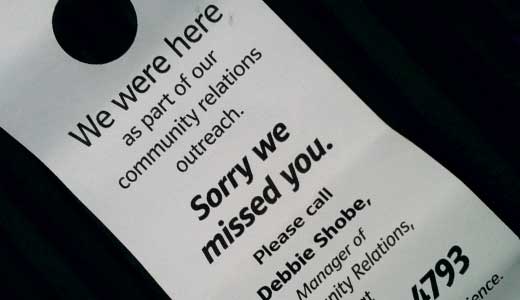 After just 11 days of inaction — during which LG&E says they made the needed repairs — the plant was fired back up on Aug. 11.

But neighbors say nothing has changed, as the plant continues to periodically shoot dust into the air. And as usual, LG&E maintains nothing is wrong.

While the residents’ frustration continues to mount — and the Metro Air Pollution Control District (APCD) continues to monitor the situation with the limited tools at their disposal — LG&E is attempting to allay their fear and anger with a seemingly altruistic deed: a free power-wash of their homes to scrub away filth quite possibly caused by the plant.

Most of their neighbors are saying no thanks.

The homes across the street from the landfill — separated by a small cemetery and just over a football field away — are the same ones that a recent LG&E-commissioned study found to be covered in significant levels of coal ash, which netted the multi-billion dollar company a nominal fine from APCD — $4,000.

An APCD official says that fine does not include probable future penalties for the two large ash clouds released by the sludge plant last month, which LG&E attributes to an equipment malfunction.

After LG&E cleaned the plant during repairs on Aug. 4 — which photographs show sent yet another cloud of ash into the air — the company tried a new tactic: going door to door, offering to wash houses for free.

LG&E spokesman Chip Keeling says the reasoning behind this move — besides being the neighborly thing to do — is to create a clean slate from which future samples can be collected to differentiate between current conditions and past buildup over decades from the adjacent plant and landfill.

“The problem with the testing on the houses is you don’t have a time frame,” Keeling says. “If there is dust on that house, you don’t know how long it took to get there.”

While LG&E acknowledges that recent samples from the houses revealed significant amounts of coal ash, Keeling is adamant that the July releases did not leave the plant’s property and travel to the Cane Run neighborhood — despite witness accounts and photographs by neighbors suggesting otherwise.

APCD finds the company’s claim doubtful, but the agency’s executive director, Lauren Anderson, condones LG&E’s offer to wash houses. Anderson says APCD is limited in how far it can go in sanctioning the company, so they are working with the company to find an enforceable agreement.

“The penalty is a very small part of the equation. This is not a federally enforceable measure. We are enforcing a district regulation, so the penalty was only $4,000,” Anderson says.

“Well, for LG&E that is nothing — $3,000 or $4,000 is not going to deter them,” she adds. “Having to come up with an enforceable plan to come into compliance, that’s something we can monitor and enforce. So if it were just a matter of ‘you did this, pay us a few thousand bucks,’ they’d write us a check and be on their way.”

But most neighbors were quite skeptical of the door-to-door scrubbing offer. Resident Panfilo Desantiago, who has lived in his home for 23 years, turned them down, including an offer to wash his truck.

“I said, ‘Nuh-uh. Not till someone tests some samples of my house.’”

In March, a lawsuit filed by 54 residents of Riverside Gardens — just north of this neighborhood next to the Cane Run plant — against LG&E was settled out of court, the terms of which are confidential. The plaintiffs had alleged that LG&E polluted their neighborhood for years with an array of toxins from the coal plant and landfill.

The general sentiment around the Cane Run neighborhood is that LG&E — far from being the generous next door neighbor, figuratively bringing over a fresh-baked pie to make up for Johnny breaking your window with a baseball — is actually trying to scrub away the evidence of a multi-generational crime.

On Aug. 11, the sludge processing plant resumed operation, kicking up a familiar cloud of dust almost immediately, according to neighbors. LG&E, which didn’t report any problems to the APCD, claimed to have solved the problem by installing a plastic flap to seal the ash inside, which deterred “any dust from leaving the (sludge processing plant) building.”

The verdict of APCD enforcement manager Terri Phelps — who noted that LG&E did not report any fugitive dust upon restarting the plant, as they are required to do — was that “the pictures I saw didn’t look like it was working.”

Mayor Greg Fischer’s office referred all questions on the matter to APCD, while Gov. Steve Beshear, running for re-election on a pro-coal/anti-EPA platform, is unlikely to intervene.

Meanwhile, the residents of Cane Run Road might simply have to wait until 2016, at which point LG&E’s plant could switch to natural gas — maybe.