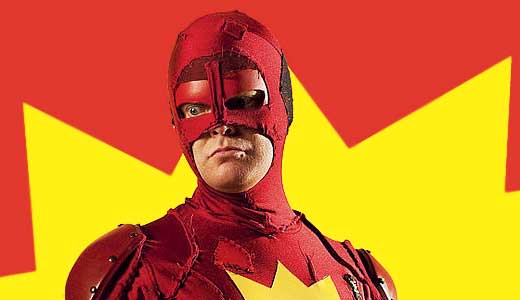 We are not big fans of Rainn Wilson from “The Office,” but this is a very watchable vehicle for his peculiar skills. When his wife becomes a druggie, he dons a cape and mask to become “The Crimson Bolt,” a superhero with no superpowers. What saves the flick, however, is the good script and amazing co-stars, such as Ellen Page (who says, “Actually, the guy’s kinda got a point. I mean, I wonder all the time why no one’s never just stood up and become a real superhero”), Liv Tyler, Kevin Bacon, Michael Rooker and Nathan Fillion.

If you can’t place the name, the late Jack Cardiff was the man who found the inner beauty of Marilyn Monroe, Audrey Hepburn and Sophia Loren, and made you a part of such great flicks as John Huston’s “The African Queen” and King Vidor’s “War and Peace.” In a career that spanned 70 years, he set the standard for camerawork. His legacy informs every movie you have ever seen. This doc lets you hear from a score of great and grateful stars who owe their careers to his talent.

Yeah, it’s another summer-camp teen-massacre flick, but what sets this apart is the setup and the cast. A Christian backwoods outing teaches pasty teens the ways of the Lord, the perils of the flesh, and the horror of the devil. But this time the preacher-teacher has brought a little of the devil in with him. Nice, with a cast that includes Dana Delany, Andrew McCarthy, Bruce Davison as the priest and extended cameos by Jesse Eisenberg and Connor Paolo.

Gorgeous blonde Katheryn Winnick still has nightmares about her mother’s suicide, while her dad, Kevin Pollak, is busy solving a spate of brutal homicides. The killings are all the work of a sadist who gives his victims impossible choices — like which family member to kill — leaving the survivors broken and insane. When Winnick is contacted by the killer, a deadly game unfolds. Surprisingly low on gore, but suspenseful.

DOCTOR WHO: THE SUN MAKERS

Finally available on DVD, this long-neglected four-part episode comes from the Tom Baker/Leela/K-9 years. They arrive on Pluto, where the populace is warmed by six small suns, yet they live in an oppressive, heavily taxed corporate society. Scripter Robert Holmes dreamed up the story (the villain is a sentient and immobile blot of fungus) after a tax audit that went on for weeks. One of the very best episodes from the show’s Golden Age.

A far-better-than-it-has-to-be chiller in the “Paranormal Activity” or “Cloverfield” style. A generic group of attractive young people head out for a party way back in the piney woods — filming it all on a hand-held vidcam — and get set upon by … what? Head and shoulders above its peers, this is a fun — and very scary — flick with a great ending. Recommended.

So far, 2011 has been The Year of the Chick Flick. They all feature weddings, bridesmaids, hunky groomsmen, a bit of spice, a couple with cold feet and noisy parents. So that you can tell them apart, this is the black one, starring Paula Patton (“Precious”) and Laz Alonso (“Fast & Furious”), snooty Angela Bassett and Brooklyn badass Loretta Devine. Beats the hell out of all that overrated Tyler Perry crap.

It seems that Martian babies spring from the ground like radishes and there simply isn’t a good mom left on the planet to take care of all of them. What to do? Why, make a clever play on a great old sci-fi title and kidnap a mom from Earth, of course. That cheap motion-capture technique behind “The Polar Express” makes all the action scenes a bit off-putting, but you get used to it by the end. But what really sets this otherwise generic Disney CGI outing apart is the nicely warped voicework of Seth Green, Dan Fogler and Joan Cusack.

Natalie Portman pays back the studio for all those Oscars by making this cheap, quickie comedy with Danny McBride and James Franco as a pair of knights on a quest to free a princess from an evil wizard. Unexpectedly, Portman plays the Amazonian warrior who comes to their rescue. Crude, vulgar and base at every turn, it wobbles between comic genius and simple stupidity. The only real problem is McBride, who simply doesn’t have the chops for this, but with a cast that includes Justin Theroux and Zooey Deschanel, you can usually overlook him. The “joining of the moons” gag is priceless. A great date flick.